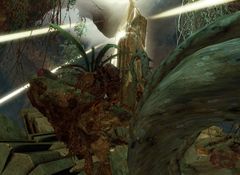 Near the north lane in Dragon's Stand is an abandoned set of Exalted ruins that has been overtaken by the jungle. A pylon still stands among the ruins, however, full of power. Communing with this place of power will net the player 10 hero points.

Jump and glide down into the hole west of the

Northern Advance Camp Waypoint — until you reach the bottom. Enter the chamber with the Exalted Pylon (the hero challenge is on top of it), and enter the passageway behind it, which contains ooze. At the end of the corridor is an updraft, use this, followed the bouncing mushroom halfway up the shaft, to reach the top level. Head east and then drop down onto the hero point while trying to avoid the various saurians trying to kill you.

This pylon is a nexus of Exalted power.

This pylon is a nexus of Exalted power.