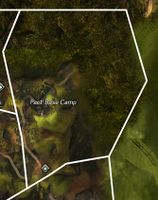 Map of Pact Base Camp 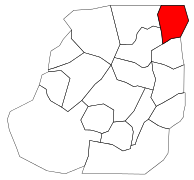 The Pact Base Camp is the starting area for the Pact's campaign against Mordremoth in Dragon's Stand. Entering Dragon's Stand from the cleared tunnel after successfully defeating the Chak Gerent during the Tangled Depths meta events leads here.

Escort Dolyak to the camp before the assault (80)

Section-stub. This key section of the article is incomplete. You can help the Guild Wars 2 Wiki by expanding it.
Reason: I think there's some more here, but I can't check right now

Doc Waggin: All of these wounded.
Doc Waggin: How can we keep up with this?
Doc Shade: Keep your wits about you. We're doing all we can.
Doc Waggin: Is that enough?
Doc Shade: These troops need us, so get your head back in the game.
Doc Waggin: Yes, yes! We can do this.
Doc Shade: Just remember, we're here to support each other.
Doc Waggin: Thanks for the reminder.

Vigil Marksman: What's our supply situation?
Whispers Keeper: Good, but still suboptimal. We need everything we can scrounge.

Whispers Keeper: How are you holding up?
Vigil Tactician: Well enough. I worry about the salad-heads. They look like they're going to crack.
Whispers Keeper: They just have to hold together long enough to finish this.

Whispers Keeper: How do you handle it? The pressure in your mind?
Priory Historian: Think of it like an ocean. Let it wash over you and pass you by.
Whispers Keeper: I'm afraid of drowning.

Vigil Recruit: Boiled stonehead again? What are they thinking?
Vigil Tactician: It's what the hunters can bring down, and what we can scrounge.
Vigil Recruit: I'm hoping that one of the downed airships was carrying spices, at least.

Priory Scholar: I wonder if I could get some samples of Mordremoth’s minions. For later.
Vigil Warmaster: If we don’t finish this, there won’t be a later.

Vigil Marksman: Have you seen the sylvari in camp? They're getting twitchy.
Priory Explorer: This close to Mordremoth? I'm not surprised.
Vigil Marksman: Keep an eye out if any of them change sides.