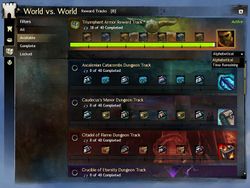 WvW Reward Tracks are World versus World goals that can be activated in the World vs. World panel.

Each WvW Reward Track has 8 tiers, with each tier containing 4 minor and 1 major reward. Each reward track contains 40 rewards in total: 32 minor and 8 major, where the last reward is generally the most valuable. To complete a reward track 20,000 points are needed, and a reward is received every 500 points. The progress in reward track is awarded at the end of each 5- minute scoring tick based on the player's current participation tier (see the table below), and whether the player is in a core WvW map.

The minimum time for completing a reward track (without boosters) is 8h 35m (103 ticks), where 195 points are earned per tick. The overall minimal time to complete a reward track is 3h 50m (46 ticks), where all available boosters increases the points per tick from 195 to 438.

Players can only make progress on a single reward track at a time, with one exception[1]. Switching between tracks will save any progress made, and players can return to where they left off. There is no known way to reset a reward track without finishing it. Upon completion of a reward track, the next reward track with the most progress (or a random one if all have equal progress) is automatically activated, unless the autorepeat icon (shaped like an infinity sign) has been checked, in which case it will restart the current track.

There are several ways to increase the amount of reward track progress earned. These modifiers do not affect Potion of WvW Rewards and Instant Reward Track Progress.

Therefore, the maximum progress per tick is +439 (487 during Call of War events) for the core WvW maps and +329 for Edge of the Mists.

Section-stub. This key section of the article is incomplete. You can help the Guild Wars 2 Wiki by expanding it.
Reason: Incomplete percentages, action sorting, etc

Your participation level determines the number of reward track points you will earn each tick. Participation is earned by participating in a variety of WvW activities, such as capturing and defending objectives, completing events, and killing enemy players.

Participation can be increased in two ways:

Participation has a variable inactivity timer, which obeys the following rules:

Participation is kept when traveling between the core WvW maps or when switching characters, but reward track progress is not awarded at each scoring tick unless you are present in the core WvW maps at the moment the tick rewards are processed.

Edge of the Mists has a participation meter that works the same way but is independent of core WvW participation.

Note that capturing the special objectives in Edge of the Mists does not increase participation. It is worth highlighting that some actions - such as defeating Veteran Scouts and Archers - do not award participation progress but still reset the inactivity timer.

The skins or items rewarded by these tracks cannot be obtained anywhere else in the game.

These tracks require Heart of Thorns to activate.

These tracks require Heart of Thorns and the corresponding Living World Season 3 episode to activate.

These tracks require Path of Fire to activate.

These tracks require Path of Fire and the corresponding Living World Season 4 episode to activate.

These tracks require Path of Fire and the corresponding Living World Season 5 episode to activate.

These tracks require End of Dragons to activate.

Dungeon tracks are available on a two-week rotating cycle. Players can complete the story mode of the associated dungeon—or in the case of Arah, completion of Victory or Death or explorable mode—to unlock its reward track permanently.

These tracks are only available for a limited period of time during the related festival, and as such can be repeated indefinitely during that period. The Lunar New Year festival is the only one without a related reward track.