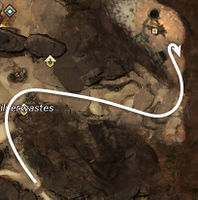 Drydock Grotto is an immense cave holding the mysterious ship, SS Topsy-Turvy, being currently worked on by the skritt living at the Picaroon Scratch. It is also the starting point for the Retrospective Runaround jumping puzzle.

Starting from Camp Resolve, go north-west towards Northern Shelf and then east to Picaroon Scratch. Go down the stairs along the eastern wall and then west through the cave until you reach Drydock Grotto Waypoint. If the gate at the stairs is shut, you'll have to complete

Drive the bandits out of skritt territory (80) first.