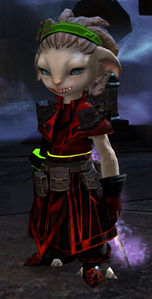 Oh, sweetie. You're truly delusional. Luckily, I have a cure for that. Rather fatal.

Tazza is the leader of the Inquest found in Sorrow's Embrace. She is Kudu's apprentice, intending to keep the Inquest facility running after Kudu's departure no matter what it takes. She shares a past with Fergg and initially does not believe his change of heart to be genuine.

Tazza joined the Inquest and rose through their ranks over time. She became close with fellow Inquest operative Fergg, admiring his ruthlessness. Kudu eventually took Tazza as his apprentice, and they headed for Sorrow's Embrace where Kudu successfully convinced War Minister Shukov and the dredge to side with the Inquest.

When a group of adventurers led by Kudu's rival Zojja drove Kudu away and foiled his plans in 1325 AE, the remaining Inquest withdrew deeper into the facility. Tazza took charge of the operation in Kudu's absence and continued experimenting with test subjects, not intending to let the dredge take over after all the hard work the Inquest had done in the area.

Tazza encountered Fergg leading an unfamiliar group into the facility, surprising Fergg who had not expected to see her there after Kudu's departure. She explained her reasons for staying behind and learned that Fergg had decided to betray the Inquest to end their operations in the facility once and for all. She believed Fergg might have become slightly unhinged but did not take the threat he posed seriously enough, instead sending underlings such as Nokk to take care of the party.

Eventually Fergg's party fought their way to the heart of the Inquest base where Tazza greeted them. Tazza reminded Fergg of his bloody past and how it would be impossible for him to ever return to Rata Sum after the atrocities he had committed in the Inquest. She made Fergg an offer: she would forget Fergg's treasonous actions and welcome him back to the Inquest if Fergg killed the rest of his adventuring party.

Fergg stayed adamant and refused the offer, however, and the disappointed Tazza ended up fighting the party herself and dying after a fierce struggle. Her final words would stick with Fergg, however, who decided to stay in Sorrow's Embrace to clean up the mess the Inquest had left behind as penance for his past actions.