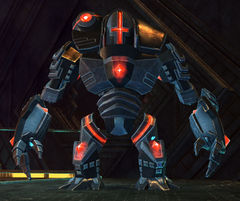 Veteran Experimental Golem is a golem encountered during Save the camp from the Inquest golem in the Koga Ruins. Sent there in order to to stop the Durmand Priory's research by destroying their encampment, it is powered by energy stolen from petrified druids found in The Shattered Henge. After the golem's defeat, the energy is returned to its source.

Save the camp from the Inquest golem (25)

Bug:
Burns is listed as one of its abilities, but none of its attacks inflict burning.
Retrieved from "https://wiki.guildwars2.com/index.php?title=Veteran_Experimental_Golem&oldid=1480500"
Categories: