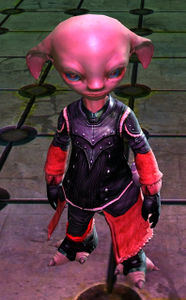 Champion Frainn, also known as Mighty Oouo, is an asura located in the Guilty Tears, situated in an asuran lab located at The Great Oouo. Due to the lab being behind the enormous stone face carved into the mountainside, Frainn is using a voice amplifier to make it seem as though the mountain is speaking to trick the local grawl population into doing his bidding, namely assaulting the dredge at Copperhammer Mines. This unusually aggressive behavior catches the eye of the Order of Whispers agents in the area, who investigate and discover that it is Frainn who is riling up the grawl.