) is the written language and alphabet of the asura. The script is still used and engraved on many stone made labs and asuran structures, also used on any console preventing other races to understand them. The language itself is described as being half-mathematical and half-structured. 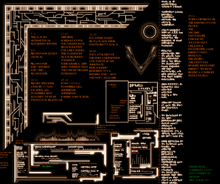 The original texts used to discover the cipher.[1]

The Asuran alphabet is inspired by the Greek Alphabet and uses some characters from it such as: "a" alpha, "d" delta, "e" epsilon, "z" zeta, "p" pi, and "r" rho. It also draws inspiration from the Phoenician, Aramaic, Cypriot and Meroitic alphabets.

The letters "C", "K" and "Q" are represented by the same letters in the Asuran alphabet.

There are also dots and dashes often found alongside this text, but these have not been translated, and it is not known if they could be translated.

Original text, asuran manifesto who helped translating the others: