Malomedies is a firstborn sylvari and the Luminary of the Cycle of Night, who awakened on the first night of the sylvari race.[1] As Luminary, Malomedies was one of the four firstborn who took the duty of guarding the Pale Tree and keeping her company in the early years of the sylvari, before the secondborn awakened. He is very private, much like others born in his cycle, but his students consider him a stern and caring mentor.[2]

He is a philosopher, astronomer, and mathematician, credited with charting the skies and bringing mathematics to the sylvari.[1][2] His studies on astronomy have been used by scholars of other races, published into books such as Skies of Nightfall and Malomedies's Observational Tips. Malomedies also works to predict the future through current events—as he calls, a "watcher of the world"—and interprets saplings' experiences in the Dream through the stars and patterns.[1] Most active at nighttime, it's been recommended not to bother him during his studies.[3]

Malomedies was unfortunate enough to be the first sylvari to meet with another race: the asura, who promptly experimented on him. Originally, he had been tall and slender, with smooth hair that was iridescent like a dragonfly's wings. He returned to his siblings horribly disfigured: his torso punctured full of holes, his face scarred, limbs withered, and hair splintered into colorless pieces.[2] He suffered from nightmares after release, and Caithe lamented that the asura had "pulled his brilliant mind apart".[4] The asura claimed to have been unaware that Malomedies was sentient,[2] but the truth of this is debatable, as they would later go on to kidnap and vivisect multiple secondborn.[5]

Hard ground makes stronger roots.
I humbly welcome you.
Keep your voice down.
Not all that is hidden should be revealed.
Seize the moment. 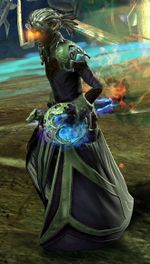 Malomedies' possible appearance prior to experimentation, as seen in Hearts and Minds.