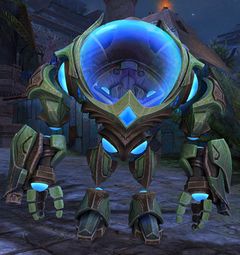 Scruffy 2.0 is the name of Taimi's golem. Similar to her original golem, Scruffy 2.0 has visible pilot controls and a seat on the inside, and Taimi uses it both in combat and as a means of transportation.

After the valiant sacrifice of Scruffy to allow the Commander's party entry in Rata Novus during Buried Insight (Chapter 13 of Heart of Thorns), Taimi began designing her new golem while holed up in the Dragon Lab.

Scruffy 2.0 made its first debut during Flashpoint, as it and Taimi arrived inside the Titan's Throat, displaying the new golem's superior environmental shielding. Designed as a mobile dragon energy lab and weapons platform, the golem allows Taimi to continue her research far away from the scrutiny of Councillor Phlunt, while also providing the pint-sized genius mobility and protection. However, as it was still in the early stages of development, the golem arrived with no weapon capabilities, and was unable to assist the Commander in combat.

The golem will remain absent throughout the events of Path of Fire, right until the Epilogue after both golem and maker hitch a ride to the Crystal Desert with Captain Ellen Kiel.

Scruffy 2.0 did its first field weapon test towards the end of the Eye of the Brandstorm story chapter by obliterating one of the remaining Branded invading Amnoon. Afterwards, while the Commander followed Aurene's vision in search of the lost city of Fahranur, Taimi, Scruffy 2.0, Rytlock, and Canach stayed behind to help the Free City clean up after the attack.

Later, while the Commander was breaking out of the prison beneath the Mordant Crescent Great Hall in the Domain of Istan, Taimi and Scruffy 2.0 somehow made their own way into the Fahranur, the First City, where the Inquest from Rata Primus had already began looting. While it is never revealed what Taimi was doing in the midst of the Inquest, events began take a sharp turn for the darker when Palawa Joko and his forces arrived.

The Commander and their party arrive at the gate hub under Fahranur to find Taimi trapped inside Scruffy 2.0. By this time, Joko or his Awakened Inquest had corrupted the golem's controls fully. Just as the Commander attempts to rescue Taimi, the golem begins to purge all oxygen from the pilot compartment, slowly suffocating its maker, while also revealing its full combat capabilities to the Commander.

After an intense battle to disable the malfunctioning golem, Scruffy 2.0 overloads its entire weapons systems in a devastating display of power, before shutting down completely.

In Hall of Monuments
Scruffy appears to be inactive.

I shouldn't poke it.