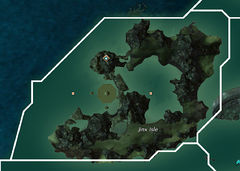 Jinx Isle is an area of Malchor's Leap. The isle serves as a base of operations for the Inquest who are conducting insidious experiments to create new powerful golems. The Pact forces enlist the help of adventurers to put the Inquest's plans to a stop.

Access to the interior of the island can be gained through a seafloor tunnel on the east side of the island. The door to the interior will be closed until enough progress has been made towards the Bashing Bauxite Alchemicals meta event. The entire interior is submerged, so this area features underwater combat and events.

Head west of the Murmur Waypoint in Whisper Bay. The tunnel entrance to the interior is located underwater on the east side of the isle. Partway through the tunnel the fog of war will dissipate, showing the two points of interest and the waypoint. Going further through the tunnel will unlock the Bauxite Alchemicals point of interest.

To unlock Versoconjouring Array, circle around to the western side of the area, until reaching a large glass panel. Simply approaching it will unlock the point of interest.

For the Waypoint, drop to the sea bottom just north of the waypoint itself. Get close enough to the window on the north side to obtain it for mapping purposes.

Keep the power conduits active until power is fully restored (79)