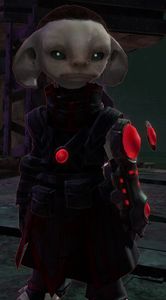 Enlightenment always comes at a price. Now you must pay for what you've learned.

Kudu is a high-ranking member of the Inquest, and a former apprentice of Snaff whose research he has been using to pursue his own goals which involve the use of dragon energy. He is the head of research for an Inquest cell at the Crucible of Eternity.

Kudu was Snaff's earlier apprentice. Snaff's research led Kudu into major discoveries about dragon energies, particularly that Elder Dragons each exuded their own energies with unique magical signatures. Snaff discontinued this research because it was too dangerous, but Kudu picked it up again as part of the Inquest after parting ways with him. Following Snaff's death in the battle against the Elder Dragon Kralkatorrik, Kudu somehow acquired one of the arm pieces which his former mentor had once worn. He also stole the designs of a personal teleporter which he used to escape to safety whenever he was cornered.

Ever a schemer, he used his charm and reputation as a genius to sway promising asuran researchers such as Plunka to his side to help him with his various projects, sponsoring them to join the Inquest. Out of all the asura he worked with, Kudu eventually took Tazza as his apprentice.[1] Kudu treated his assistants poorly, however, but none of them left his side as they wanted to achieve great things under his leadership.[2]

When the sylvari Peredur visited Rata Sum to learn about the asura, he was hired by Kudu who soon revealed his true colors and forced Peredur and other unfortunate captives to work for him. Whenever Peredur made a distraction and attempted to flee, he found out that Kudu was one step ahead of him and stopped each escape attempt.

In 1325 AE, Kudu took note of the Variable Atmospheric Conditioner, the promising invention by the Snaff Savant. Seeing potential in it, he decided to plagiarize the work and improve it to turn it into what he called the "Weather-matic 5000" before inviting Zojja, his successor as Snaff's apprentice, to a demonstration of his weather machine for the Arcane Council.[3] Although Kudu believed that the Snaff Savant would not be bold enough to accuse him of plagiarism, he took no chances. To get rid of any evidence linking him to idea theft, he sent his lackeys to burn down the archive annex and the blueprints within it.

Kudu was certain that Zojja would want to investigate the matter by interrogating Plunka whose lab was close by. He told Plunka about Zojja's visit in advance and ordered her to keep his rival trapped alive so that he would enjoy Zojja's suffering. Zojja and the Snaff Savant outsmarted Plunka with the trapped Peredur's help, however, and ultimately made Plunka reveal that Kudu was testing the weather machine at Mrot Boru. Deciding to either enter the testing grounds or Kudu's lab to force answers out of him, Zojja and the Savant eventually cornered Kudu. However, Kudu used his personal teleporter to flee before he was caught while gloating about his upcoming show intended for the Arcane Council.

Kudu's plan was to permanently flood Rata Sum with the weather machine, seeding chaos and creating opportunities for Inquest power grabs. Zojja and the Savant stopped Kudu's plan before it could come to fruition, but that did not stop a skeptical High Councillor Flax, aware of the animosity between Zojja and Kudu, from ordering a full subcommittee investigation into whether Zojja had sabotaged Kudu's device.

Later that year, Zojja heard of a connection between Kudu and a recent dredge revolution, and headed to Sorrow's Embrace to investigate, with Caithe and Eir Stegalkin in pursuit. Using Snaff's research, Kudu had rebuilt the Iron Forgeman, fusing the energy of a draconic minion with the ancient dwarf creation. Zojja managed to put down the revolution and destroyed the Forgeman with Caithe and the Pact Commander, but Kudu got away as usual.

Zojja tracked Kudu to the Infinite Coil Reactor, determined to stop him from using Snaff's research for evil. There, she was joined by the Pact Commander and the reunited Rytlock Brimstone and Logan Thackeray. They discovered that the Crucible of Eternity removed and concentrated dragon energies at the bottom of the complex. Kudu was corrupting his captives with this energy, turning them into dragon minions that only he could control.

Kudu, who had been experimenting with dragon energies on himself, was killed after a fierce battle. Before perishing, however, he unleashed his greatest creation to destroy the group: a dragon champion of his own, created from experiments on a captured giant. However, the monster ultimately perished, and Zojja's party fled from the facility, denying Kudu his revenge.

Despite Kudu's demise, the Inquest did not abandon his research on dragon minions. The project continued, this time under the supervision of Overseer Kuda who tested the synchronization and combat abilities of various dragon minions at the Specimen Chamber on the Sandswept Isles in 1331 AE.

Section-stub. This key section of the article is incomplete. You can help the Guild Wars 2 Wiki by expanding it.
Reason: Missing skill's descriptions, spell check possibly for the last skill?