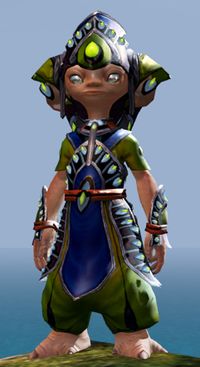 They call me "The Zinnsational Zinn" for a reason. You may call me "sir."

Zinn was a renowned asuran golemancer who led a lengthy and colorful life. He assisted Krytan loyalists in the war against the White Mantle and developed Spectral Infusion to combat the mursaat. Zinn eventually founded the asuran colonies of Rata Novus and Rata Arcanum, and lost his life in a druid attack while attempting to terraform Draconis Mons.

A gifted golemancer, Zinn built several golems, including M.O.X. However, his most notable work was the creation of P.O.X.'s Reactor Blast.[1] He had disagreements and, ultimately, a bitter rivalry with his former mentor Oola, which led to him burning her books in public. This in turn caused Oola to plot revenge by bribing the Arcane Council to her side in the dispute.[2]

The bribed Arcane Council sentenced Zinn to 10 years of banishment from asuran lands for unintentional attempted regicide of human rulers, which had involved the assault of the golems Zinn had invented for a mysterious and sinister client.[3] Around this time Zinn had been in contact with Palawa Joko who had tricked him, which the golemancer considered the low point of his career.[4]

After being banished, Zinn traveled to Kryta where he was conscripted by the human necromancer Livia to assist in the war against the White Mantle alongside another asura called Blimm. He developed Spectral Infusion from the body of a Seer, allowing the Shining Blade and Lionguard to prevail over the mursaat who had relied on the use of Spectral Agony which was rendered useless thanks to Zinn's invention. Zinn also researched the power of souls.[5]

Once the war for Kryta had concluded in 1079 AE, Zinn traveled west to the Heart of Maguuma. He and like-minded asura founded the underground city of Rata Novus, where Zinn ruled as High Councillor. Zinn opted to keep the city hidden from the rest of the asura, including the Arcane Council, whom he did not want to meddle in Rata Novan studies.[6] Research in Rata Novus was more liberal than in other asuran cities and less concerned about morality as long as the work provided results.[7]

While getting used to their new home and expanding their territory, the colonists learned about the aggressive, insectoid chak from local hylek lore. They eventually encountered the chak and had to fight them off, developing several groundbreaking defenses to keep Rata Novus safe from invasion.[1] They also met with the Exalted and collaborated with them to exchange ideas and technology while studying the powers and weaknesses of the rising Elder Dragons, focusing mostly on Primordus who had driven the asura to the surface from the Depths of Tyria some time after its awakening in 1120 AE.[8][9][10][11]

The Rata Novans explored various areas such as Bloodstone Fen and chose to leave less aggressive centaurs such as Ventari in peace when Rata Novan krewes were allowed to use Ventari's Refuge as a resting area during their scouting of the jungle.[12] The colonists even successfully used their technology to establish remote labs in an outpost in Dragon's Stand as well as in the ruins of Fahranur, the First City on the Isle of Istan.[13]

In 1173 AE, the chak emerged en masse and overran Rata Novus after being drawn to the ley lines there.[14] Zinn was among the few to escape, and relocated to Rata Arcanum, which was a colony in Draconis Mons that was still in development. Attempting a new beginning after being exiled thrice, the golemancer developed a terraforming device, but its use and effects on the environment angered local druids who were trying to keep nature in balance.[15] Zinn, however, had been hardened by his earlier hardships and resolved to succeed no matter the cost. He ignored the druids' protests and instead captured four ancient druids, placing them in newly constructed vaults for experimentation to siphon their magical essence to empower the device.

The remaining druids returned with reinforcements and slaughtered Zinn and the rest of the colonists of Rata Arcanum in 1175 AE.[4] Following Zinn's demise, M.O.X. engaged the golemancer's funerary instructions which included cremating Zinn's body, burying the ashes in the Burial Chamber of the Golemancer's Tomb, and carving a memorial stone in his honor.[14]

Zinn's work survived his demise. Tales about a legendary lost asuran city spread among the asura on the surface for centuries, and the Dragon's Watch guild discovered the fallen Rata Novus and the knowledge within it in 1328 AE. Reactivating the Rata Novan power grid and finding the asura's research helped the Pact locate and fight against the Elder Dragon Mordremoth. Further exploration and activation of the Dragon Lab allowed Dragon's Watch to learn more about the Elder Dragons' powers and weaknesses while also alerting the Arcane Council and the greatest minds of Rata Sum to study the area to advance asuran science.

The asura Taimi expanded on Zinn's research on Spectral Infusion to provide the Pact Commander with magical protection against certain types of threats such as hazardously high concentration of ambient magic and Jade Constructs.[16][17]

The disovery of Rata Arcanum drew the Inquest to excavate it in search of lost knowledge and dangerous magitech, while the Order of Whispers worked to ensure that any devices Zinn had built would not fall into the Inquest's hands.[18][19] The location of Zinn's tomb remained unknown to most people exploring Draconis Mons, however.

The four ancient druids, imprisoned in Zinn's vaults for centuries, were eventually freed by the Pact Commander who both earned the druids' blessing to enter the volcano in pursuit of the rogue god Balthazar and gained M.O.X. as an ally. Thanks to the information provided by M.O.X. and recorders which had been scattered throughout Draconis Mons, details of Zinn's later life became known to scholars.

The Inquest had found and taken over the abandoned Rata Novan lab in Fahranur and used its gate hub as one of their staging grounds hidden from the rest of Elona. The lab was later taken over by Palawa Joko who used Zinn's advanced asura gate network to send Awakened squads to invade Central Tyria.

Despite being thwarted at Rata Arcanum, the Inquest had managed to secure some of Zinn's deactivated golems and accessed their databanks for useful information. They repurposed some of the golems to defend key Inquest strongholds such as Rata Primus on Sandswept Isles in 1331 AE.