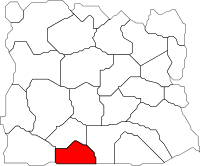 Nightguard Beach, sometimes referred to as the "Best Kept Secret in the Hinterlands," is an area in the southwest of the Harathi Hinterlands. It is a hidden cove, accessible by an underwater tunnel from Guardian Lake or through an elevated tunnel from the Bonerattler Caverns.

From Nightguard Beach, the Seraph allied with the local quaggan stage attacks on the centaurs of Harathi Highlands, using the secluded location as a secure base where they can safely plan and prepare while their enemies search for them in vain. However, with the growing influx of refugees (often tailed by bandits in league with the centaur) seeking asylum at Nightguard, the location remains harder and harder to keep hidden, and some Seraph even believe the refugees should be forced out to fend for themselves. Of course, while some are pessimistic about Nightguard's future, the refugees themselves remain hopeful.

Help the Seraph at Nightguard Beach (33)

Accompany Muldoon on a walkabout around the Nightguard Beach (34)

Refugee (1): It's dark and cold and reeks of fish in here.
Refugee (2): Then this is the safest place around. I'm staying.

Refugee (1): I can't believe the lowlife scum you see on the road.
Refugee (2): Did you see that guy pretending to be a preacher? He's fleecing his flock for money.
Refugee (1): That's low. So what'd you get off him?
Refugee (2): His coin purse and a dagger. I can pawn the blade back in town.