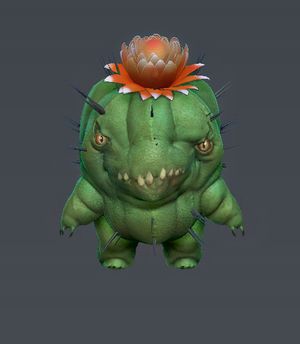 It's constantly grumbling, it can use simple tools, and it's aggressive.[1]

The Choya are plant creatures native to the Crystal Desert. They attack their foes with needles shot from their body. Upon dying, they explode, dealing damage to nearby enemies and inflicting conditions.

There is a peaceful village of choya atop of a mesa at Brightwater Inlet in the Desert Highlands. It is said that this village remains peaceful because the choya kick troublemakers off of the mesa, preventing their return. According to Explorer Beth, they literally kick them off of the cliff. This implies that all the hostile choya seen across the desert are these trouble-making choya, or descended from them.