More Than She Bergen For

More Than She Bergen For 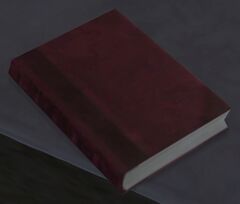 More Than She Bergen For is a book by Snargle Goldclaw found in the Hall of Monuments, accessible after finishing Steamy Selection achievement.

The tantalizing steam shrouded his strong form in a veil of vapor and mystique. But she knew it was him. Of course it was him. She would recognize his broad warrior's shoulders anywhere. If only, she thought, she could dig her own claws deep into the ridges of his back, she'd leave him some battle scars of her own.

"I take it you got my letter." His voice was deep, a tad hoarse, but somehow melodious in its rugged candor.

"We shouldn't be here," is all she could manage to whisper. He turned and flashed her a mischievous, fanged smile. And my, what impressive fangs he had.

She wasn't sure if it was the warmth of the Bergen Springs that caused the heat to rise in her cheeks, or something far hotter.

"What if they find you? They'll kill you!"

"Then let's make it a night to die for!"