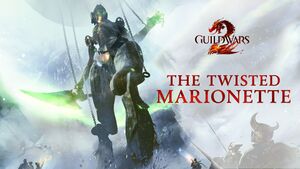 Defeated long ago by Tyria's defenders, the colossal Twisted Marionette was one of the demented Scarlet Briar's most infamous creations. Now, its shadow lurks within the Scrying Pool, awaiting adventurers bold enough to test their might against the clockwork memory.

Wrath of the Twisted Marionette was a bonus event that was available from July 13 until July 20, 2021 with a special public instance for up to 80 players. After the bonus event ended, the two non-daily achievement categories and a private instance were made permanently available.

These achievements and their rewards were made available from Side Stories after the bonus event ended:

Daily achievement, which was available only for the duration of the bonus event, grants Bonus Boxes of Goods. 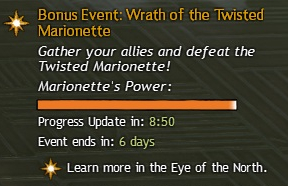 Throughout the event, a progress bar tracked the progress of the Community Goal. The tracker updated in 15-minute intervals, decreasing Marionette's Power as more Twisted Marionettes were defeated.

To receive the rewards, players could speak with the Mist Stranger in the Eye of the North. In total, there were three global achievements. They were only available during the bonus event.