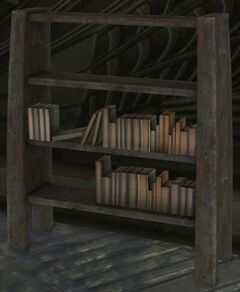 Books: Goldclaw's Collected Works is a bookshelf next to Snargle Goldclaw in the Eye of the North, where his novels, notes, and rough drafts appear as you collect them as part of the Searching for Inspiration achievement.

This shelf is dedicated to Snargle Goldclaw's novels, notes, and rough drafts. It is surprisingly well organized.

Read an excerpt from "A Kralkatorrid Affair." (If you have collected the book)

The Brandstorm raging outside was a zephyr compared to the storm in Hubert's heart.

The door crashed open, and she who haunted him—she who had once been his lover—burst in.

"Wait, is that a good thing?" Hubert asked. She answered by leaning in. Hard angles met soft flesh in a long, passionate, and surprisingly tender kiss. And Hubert realized that maybe, just maybe, he could love again.

Read an excerpt from "Love Is Blind." (If you have collected the book)

Love Is Blind by Snargle Goldclaw

Karenina, her name was. A single glance from her had changed Svanhild's life.

Were all dredge so beautiful? She had never stopped to wonder, not while cutting them down. They had just been a nuisance to be cleared from the foothills. Now questions gnawed at her like starving snow leopards.

She had to know more, even if it meant making mountains out of molehills.

Read an excerpt from "Mist Connections." (If you have collected the book)

Tianni had schemed her way out of the Domain of the Lost, ducked and weaved across the Eternal Battlegrounds, and outwitted the Mad King himself—but now, standing at the divide between the Mists and Tyria, the afterlife and the life she'd left behind, all her scientific brilliance was suddenly useless. But what drove her wasn't scientific, so she closed her eyes and leapt.

A strange tingling. A sinking sensation. Had it worked?

She opened her eyes. There, in front of her, was Zipp. Her Zipp. Who, even as he spilled Ooze Booze all over himself in shock, was still the most beautiful bookah she had ever seen.

With her feet firmly planted once more on the ground of Rata Sum, Tianni felt something new. Not relief. Not determination. But hope—true hope.

Read an excerpt from "The Ebonlocke Covenant." (If you have collected the book)

Runebanger could hardly comprehend what he'd just witnessed. Suddenly it all made sense. Why Smoulder and Empress Jenny had been willing to forget years of hostilities. Why they suddenly spoke so positively about the "potential" of an alliance between charr and humans.

He clutched his mane as furious tears matted his cheeks. How could Smoulder even LOOK at Jenny that way? What about her furless figure could possible[sic] appeal to rugged, tough, well-groomed charr such as they?

Burn it all, the mouse didn't even have horns! Did no one appreciate the gentle curve of horns anymore?

No. Brood Legion would not stand for this. Not if Runebanger had his way.

Read an excerpt from "Destiny's Pledge." (If you have collected the book)

This heavily worn tome is all but illegible. A description of its contents remains preserved by the leather cover.

After a devastating rejection by his queen, Captain Rogan Fackeray swore to never love again. But when his duty traps him in a single-cot prison cell with the ruggedly handsome Tribune Gritlock, Rogan's vow is put to the test. From the author of the smash hit "A Kralkatorrid Affair" comes a sultry dance between human and charr; cross-species desire heretofore unexplored!

Read an excerpt from "The Passions of Faren." (If you have collected the book)

The Passions of Faren by Snargle Goldclaw

Deep in the Maguuma Jungle, the world had just been saved. Mordremoth had fallen...in love.

"No one can know that you still live," Faren said, a single tear flowing down his cheek. "They wouldn't believe in you the way I do."

"I know, my shining knight." The Elder Dragon whispered back. "And yet, you must leave my side. For you have other lives to save...and more love to give."

Read an excerpt from "It Takes Two to Tengu." (If you have collected the book)

It Takes Two To Tengu by Snargle Goldclaw

"We don't normally allow outsiders within our walls," Makoto said, enveloping her tiny asura lover in her feathered arms, "So you'll have to swear not to tell anyone what you see here."

Prapp gazed in awe at the wonders around him. "What happens if I slip up," he thought. He had a hypothesis, of course, but a city built entirely of candy—why, there were several papers' worth of innovations here!

Makoto chuckled, entirely mirthlessly. "I'll have to kill you, of course."

Read an excerpt from "Koss on Koss: Uncensored." (If you have collected the book)

Melonni, Dunkoro, Talkora[sic]. Koss has had many loves in his life, but something was always missing. He'd always needed...more. Here, finally, was the solution.

After all: Who could ever be MORE than Koss?

Koss gazed longingly into the eyes of his doppelganger, who gazed back with equal affection. The completion each had sought, found. For Koss—an equal. For the doppelganger—a target more worthy than any other.

As Koss embraced Koss, their love shifted beyond reality. It defied dimensions. And their journey together was just beginning.

Read an excerpt from "Svan Song." (If you have collected the book)

Fryst tried to chill his heart, but he couldn't stop the heat rising in his cheeks.

He was a good Svanir; he never questioned the teachings of his shaman. He always gave women the cold shoulder, knowing they were unworthy of Dragon.

But that was before Brenna. Brenna and her skilled sword hand and icy taunts. And her smiles.

Burning questions exposed cracks in long-frozen ideals. What was this strange, molten feeling rising in the pit of his stomach? Was everything he'd been taught a lie? He was beginning to see that maybe he should rest.

I can sleep now, too. We can dream together beneath the ice. Let's rest, just for a while. Let's give up. All of us together, sleeping forever. I think I'll lie down.

Read an excerpt from "Commander of Your Heart." (If you have completed the Searching for Inspiration achievement)

Commander of Your Heart

"Don't think I haven't noticed," the Pact commander says as your heart skips a beat, "How you've followed me into danger, over and over. How crucial you were against the Risen, and the Mordrem. You're an invaluable ally."

A pause. You should be flattered, you know. But once again, the meeting <he/she> called was strictly professional. Your heart sinks as the silence stretches on, unable to say what you really want.

But then the commander moves close. "I've also noticed the way you look at me." You can feel <his/her> warmth. "The way you've always looked at me."

"So now," the commander continues, taking your hand, "I'd like to propose...a different pact. A lifelong pact. With you."

Almost on cue, a flock of snow-white seagulls takes flight.

I'll check this out later.