During global faction mobilization events, players can pitch in to train, rally, and build trust with factions both familiar and unlikely. You’ll be rewarded for your efforts, and your allies will begin randomly appearing in Dragon Response Missions to lend their special strengths to the fight.

Icebrood Saga: Mobilizing Allies was a series of bonus events during the Champions episode that involved supporting allied factions. Despite the bonus events and the faction merchants being limited, all their offered items were eventually available for purchase from Tactician Erlandson.

To be eligible for any bonus event rewards, one had to have spend at least 5 marks at the faction vendor during the duration of the bonus event. 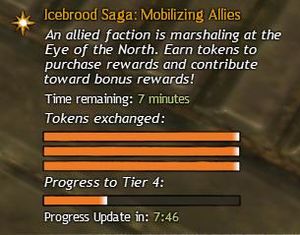 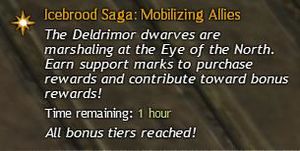 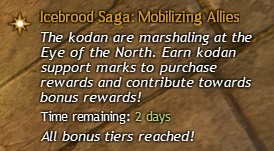 Throughout the event, a progress bar would track the progress of the Community Goals. The tracker updated in 10-minute intervals, increasing as more items were bought.

Players would receive rewards for all tiers, so long as they had participated in one.