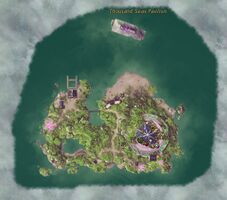 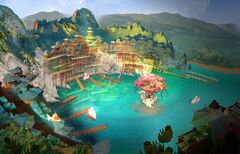 The Black Lion Trading Company has just opened a brand-new luxury lounge in Cantha! Enjoy the view, relax on the beach, and take advantage of all the conveniences you need in one exclusive location.

The Thousand Seas Pavilion is a beautiful isle and a safe haven, adrift within the Mists[1], originally being a Canthan location that somehow ended up there.[2] It features most services, crafting stations and many fishing holes, and is unusual amongst lounges in that it exists within its own unique map.

Access requires one of the two types of Thousand Seas Pavilion Pass:

Bugs:
Anomaly:
Mechanically, the API lists the map as being in Cantha, but geographically it is currently in the Mists, as confirmed by the devs and in-game passes. The character background is also that of the Mists maps, and is similar in this case to the Mistlock Sanctuary, which also has an instanced, separated map, which mechanically appears near Lion's Arch but is in the Mists. On the world map the island is located just above Seitung Province, but appears fogged/unexplored and cannot be entered without using the pass from your inventory. The world map can be accessed from within, however, via the map slider function.