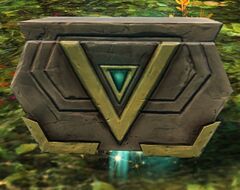 Zinn's Stashes are chests found in Draconis Mons. They are uncovered by using an Ancient Asuran Power Source and the accompanying special action skill,

A player must have either the Scan special action skill active or an Ancient Asuran Power Source in their inventory in order to loot the chest. The Power Source will not be consumed on looting, so another player may uncover the chest and allow you to loot it. A chest is active and lootable, once found, for about 5 minutes, after which it cannot be uncovered again for an unknown amount of time.

Bug:
They often spawn inside rock walls or floors, and thus are inaccessible.