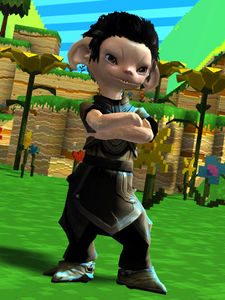 Moto is an asuran inventor found standing near his most famous invention: the Super Adventure Box. He is also an ally found inside the Super Adventure Box: he gives the Pointy Stick to the players at the start of their adventure in Sunny Glade, and he will also take Continue Coins to allow players to resume playing when they run out of lives.

Moto worked in a krewe with Ketto, Nimbb, Wortt, and Yavvi in Rata Sum for two years. He received a gold bracelet from Yavvi as a birthday gift. Moto convinced Lortt to fund the krewe's prototype edutainment device which was dubbed the Adventure Box.[1] However, he was expelled from the krewe some time after he had pulled a particularly mean-spirited prank on his fellow krewemates.[2]

Penniless, hungry and without a lab, Moto only held on to a box of possessions when he ordered food from Ekko's fish stand. Realizing that he had no money to pay with, he offered his bracelet, only to receive a used empty skewer—and Ekko laughing mockingly while tossing the bracelet in the trash bin—in return as he departed. He approached Lortt for funding, only to be turned away when he admitted that he no longer had a lab to work in.

In the following days the College of Dynamics dormitory showers were cleared out when students discovered their skin glowing after showering. Dynamics technicians had been stumped until an anonymous tip had fingered Ekko's fish stand, known for fish made luminescent by the phosphorescent agents which Ekko was feeding them, as a potential culprit. As Ekko was arrested, he tried to plead his innocence by claiming that someone had stolen his phosphorescent agents, but the Peacemakers ignored his complaints.

Weeks later, Moto had set up a makeshift lab in the abandoned dormitory showers. He had managed to convince Lortt to fund a working prototype of his latest idea but found it difficult to work under his less than ideal conditions. However, his desire to make a name for himself—and the fear of receiving no more funding—fueled Moto to hastily assemble what would one day be known as the Super Adventure Box.

By the time Lortt visited him, however, Moto realized that he had fallen asleep and that his invention would not meet the investor's expectations in its current, barely finished state. While Moto was preparing an apology, Lortt activated the prototype which, much to Moto's surprise, exceeded both their expectations as they were transported into a stylized virtual world. Moto did not think that he had polished the characters, but a model of Princess Miya who greeted the pair was in a surprisingly finished state and reminded Moto of someone special from his life, possibly Yavvi.

Recovering from the surprise, Moto explained the functions and story of the Super Adventure Box, impressing Lortt who decided to continue funding him. Lortt complimented Moto for integrating an aspect of human fairytales—saving a princess who had been kidnapped by a villain—to attract these "bookahs" to try the game, but he questioned how to promote the product to the charr and the norn. Moto replied that he would simply spread word that the game would be too difficult for those two races, which they would then see as an insult and come play it to prove their might.

As Moto prepared to return to reality from the virtual world with his pleased financial backer, however, he froze when he spotted an ominous shadow in the shape of himself behind Princess Miya. When he blinked, however, the shadow was gone.[1]

In 1326 AE, Moto finally unveiled the Super Adventure Box in Rata Sum and invited people from all races to explore its immersive gameplay. The game shipped with World 1—consisting of the Sunny Glade, Dark Woods, and Kingdom of Fungus zones—and was received well by many Tyrians.

The Super Adventure Box glitched during this time, manifesting Super Mysterious Chests throughout Tyria and unleashing aggressive sprites on passers-by. Upon hearing reports of this strange phenomena, Moto enlisted able adventurers to roam Tyria and defeat the rogue sprites in exchange for goods.[3]

Upon the return of Super Adventure Box with the Back to School update, Moto added World 2—consisting of the Rapids, Pain Cliffs, and Storm Top zones—as well as the punishing Tribulation Mode to test the skills of the more experienced players. He also added the easier Infantile Mode so less able adventurers would have a chance to enjoy exploring his virtual world.[3]

While playing through World 2, the Pact Commander happened upon the Sparkling Pools, a zone 1 of World 3 which was still under construction. The Commander met with the enigmatic Genie of the Box who revealed Moto's supposed secret: in order to "win the Super Adventure Box", the player would need to defeat the true enemy's machine in Rata Sum.[4] Following the genie's cryptic instructions and clues, the Commander left the virtual reality and entered a special code to a control panel to gain access into a hidden lab which had once belonged to Moto but which had been taken over by Ketto since Moto's departure from the krewe.

The control panel malfunctioned after the Commander had entered the code, however, and caused the testing of the Somno-Scholar to fail much to the frustration of Ketto and the rest of Moto's ex-krewe who had hoped to use their latest invention to win the Snaff Prize. Upon investigating the malfunction of the Somno-Scholar, the krewe discovered a subtle alteration to the program, making both Ketto and Yavvi realize that it resembled a prank which Moto had pulled before he had been expelled from the krewe. Despite Ketto insisting that Moto had been behind the sabotage, Yavvi pointed out that Moto had a waterproof alibi as Peacemakers had not seen him leave the promenade where he had been promoting Super Adventure Box.[2]

Returning to Moto with the troubling discovery of what inputting code had actually done, the Commander revealed what the genie had told them to do to win the game, and asked the inventor for compensation. Moto, however, believed that the Commander had been playing the game too long and was imagining things, and he suggested that the Commander take a break from playing and get some fresh air to clear their mind.[3]

During this time, Moto was approached by an outraged professor, a charr legionnaire, and Subdirector Klein of the Consortium. Moto challenged the professor with the idea that the colleges' education system was outdated and needed be more innovative and experimental, which the Super Adventure Box provided in the form of thrilling gameplay, while the professor simply dismissed the inventor's ideas as "heterodoxical nonsense." The legionnaire attempted to make a deal with Moto to use the Super Adventure Box technology for military training, which Moto denied as he viewed his invention as a tool for education and not for warfare.

Moto likewise denied Subdirector Klein the chance to purchase his invention for the Consortium's commercial use. When the subdirector tried to approach Moto again with the offering of the two of them working together to turn the Super Adventure Box into a mass product so everyone got to enjoy virtual reality at home, the inventor warmed up to the idea somewhat although he wanted to keep his idea local and limited to Rata Sum for the time being.

In 1329 AE, the asuran scholar Taimi invited Moto to visit her in Rata Novus. Taimi had had difficulties getting the Novan simulation room operational to use it for virtual reality battles against Elder Dragon minions, and she hoped that Moto could help her progress in setting up the system. Taimi convinced Moto to both help her and keep the existence of her hidden Dragon Lab a secret from the Arcane Council whose researchers were exploring and cataloguing the rest of Rata Novus. Taimi's associate Cami made sure that the pair would not be discovered while they worked on the simulation room.

When Taimi left Moto alone with the room's code for two minutes, the mischievous inventor implemented an anomaly called the Destroyer of Bananas amidst the other simulated destroyers as a practical joke. Taimi would only learn what Moto had done when she tested the destroyer program on the Pact Commander and Rytlock Brimstone.[5]

In the Game Over room

I've always had your back, Moto. (If you have an Infinite Continue Coin but do not have the Super Bee Dog Mail Carrier unlocked or in your inventory)

Yes, I see you have my Infinite Continue Coin. I thank you for your support. Enjoy this holo-rific Super Bee Dog Mail Carrier as a token of my appreciation. (Receives carrier)

I had a very brief moment to squash a few bugs and add small bits of polish. Your experience in the box will be better than ever!

When can I play?

Soon, I assure you.

Good luck with your endeavor.

In the Game Over room, with at least the given number of Continue Coins in your inventory
Would you like to continue to the active zone?

No, not just yet.

Use an Infinite Continue Coin and travel to the active zone. (Returns to your last checkpoint)

I want to use my continue coins instead. (Same as above)

Nothing at the moment.

In the Game Over room, if no Continue Coins of any type in your inventory
(Directly opens vendor window)

Greets
Pattern perception promotes puzzle performance.
Challenge yourself to learn.
Discover through collaboration.
Jump in and surprise yourself.
I like to think inside the Box.

Just a reminder. There is no food, drink, or six-dimensional mathematics allowed inside the Super Adventure Box.
Are you going to let the princess remain captured? She needs your help as we speak!
You've inquired about it. You've requested it. Now, it's here. My Super Adventure Box is back for a limited time.
The Princess needs you! Stop Lord Vanquish and his goons to save her!
Is your krewe getting you down? Stick to your guns and make your dreams come true!
Come see the future of fun right here!
More excitement. More thrills. Take a break from Tyria and take a spin through my world.
Come one, come all! The Super Adventure Box has returned for your amusement!