This article is about the krait artifact. For the bouncing marble found in Shattered Observatory, see Globolla Marble.
Spoiler alert: The following text contains spoilers relating to the story of Guild Wars 2. 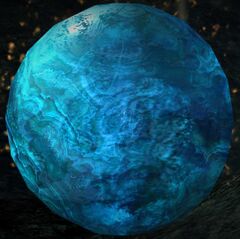 The orb you seek is a thing of legend, known only to deep dwellers. Its origins are lost, but it is extremely powerful. It may pose its own dangers, but it does counter the undead dragon's influence. Wherever the orb is, those who die near it do not rise again.

The Blue Orb, also referred to as the krait orb and water orb, is an object of legend, known only to deep dwellers of the Unending Ocean such as the largos. Its origins, purpose, and true power are still a mystery, but it was used by the krait to ward against the corruption of the Elder Dragon Zhaitan and was treated as a holy relic. It is described as a perfect sphere full of arcane power, and may hold its own dangers.[1][2][3]

The only thing known about the orb's origin is that the krait did not make it, but found it recently in the depths.[1][4] In 1325 AE, the krait kept the orb in constant transit between their deeps at the Mire Sea and Nonmoa Lake to keep them free of Risen influence. The orb was eventually recovered by Pact Crusader Apatia and Sayeh al' Rajihd with the potential help of the Pact Commander and taken to Fort Trinity for study. Risen forces attempted to steal the orb during the Battle of Fort Trinity, but were repelled.[5] The orb has remained in Fort Trinity since to keep the fort as a safe haven from the Risen.[6]

It is later learned in Cantha that the Blue Orb is but one of many Eyes of the Ocean.