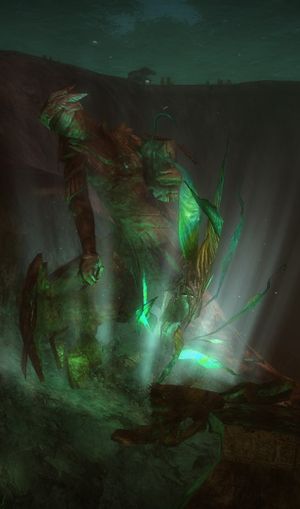 Submerged statue of Kormir, at the Temple of the Ages.

The Ascension of Kormir refers to the event whereby the leader of the Order of the Sunspears, Spearmarshal Kormir, joined the human pantheon in 1075 AE. It was the end result of the fight against the fallen God of Water and Secrets Abaddon and his attempt to break free of his imprisonment by bringing about Nightfall in Elona.

Kormir and a group of Heroes battled Abaddon within his Realm of Torment and were successful in that aim. However, when the weakened god was destroyed, it caused his now-unbound magic to spiral out of control. At this point Kormir, using the gift the gods gave her in the Temple of the Six Gods, managed to absorb the magic, thus preventing the world from being destroyed. In the process, she usurped Abaddon's position as god and became the Goddess of Truth. While Kormir was able to contain a large portion of the magic from the fallen god, the remaining magic caused an imbalance in the flow of magic in Tyria, causing the Elder Dragon Primordus to stir, and subsequently awaken in 1120 AE.