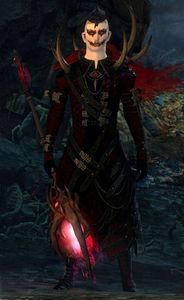 Bloody Prince Edrick Thorn (also known as Edrick the Bloody and nicknamed Eddie by his father, self-titled Painlord) was the son of Mad King Oswald Thorn of Kryta. In life, he was a lanky boy, with a head of spiky hair, both lips and eyes smeared with pitch, and was said to have two facial expressions: scowl or smirk.

Prince Edrick Thorn was born as the son of King Oswald Thorn of Kryta circa 805 AE.[1] Not much of Edrick's history is known due to Oswald removing knowledge of him from history. Edrick's mother was killed by his father via beheading on Oswald's birthday, and his favorite stepmother, Henrietta, was killed by Edrick himself when he nailed her hands to a drake during a game of "Pin the Tail on the Drake"—though Edrick does not recall this.[2] Edrick was fond of coming up with what he considered to be fearsome titles such as "Painlord" and the Bloody Prince, but Oswald was embarrassed by the titles.

When Edrick was barely twenty, Oswald had him thrown into a dungeon for still-unknown reasons, though he escaped and bit off the guards' tongues to keep them from talking. Upon escaping, the Bloody Prince burned down the Krytan village of Pelchalice, killing 600 villagers in approximately 825 AE.[3] It was the fifth act that season, rumors claiming to be due to a woman, and done in order to incite the populace against his father to take the crown for himself. The angry mob that formed remained outside Castle Thorn for three days before King Oswald learned it was Edrick's doing and that the prince was waiting for him in the throne room.

When the Mad King walked in to chastise his son about his acts of punless violence that were unbefitting of the Thorn name, he witnessed the prince sitting on his throne. Edrick announced his intention to overthrow Oswald with the help of the mob, angering Oswald. However, the Bloody Prince pressed his advantage by delivering an ultimatum to his father: Oswald would either surrender his reign willingly and Edrick would drive the mob off, or he would kill Oswald himself and make the mob think he put an end to their Mad King.

Seemingly cornered and outwitted, Oswald successfully persuaded the victorious Edrick to take him to the undercroft which, according to him, held a wealth of rare and valuable armaments that the prince would be inheriting. However, when the pair reached the undercroft, they found only an ornate metal reliquary which Oswald revealed to be an infamous torture device known as "The Shell of Insanity" which his counselor Dribbin had enchanted. While the Bloody Prince was recovering from the revelation of having been tricked, the Mad King shoved him into the reliquary and stuffed the prince's mouth with candy corn. Oswald explained that if any other person had threatened him, he would have publicly executed them for treason, but Edrick would not share such a fate as it would make the prince famous. The Mad King had something far worse in mind for his son: Edrick would either starve to death or suffocate in the box and be driven mad in his last moments in order to become worthy of the Thorn name.

Before the rioting mob was able to breach the castle, Oswald ordered his scribes to purge Edrick's name from the royal archives; effectively erasing the Bloody Prince from history with the exception of accounts by Mad Baron Wycker. The Shell of Insanity was then sent to the former Istani desert island estate of the Mad King's late wife Princess Zola but was stolen multiple times before it arrived in Nolani Academy.

Determined to contain the potential threat from being released upon Tyria, Magister Tassi is in search of living candy corn. With the adventurers aid, Tassi acquires a living candy corn elemental to use in a prototype Candy energy rifle. Using the new weapon the team manages to coat Bloody Prince Thorns reliquary in a candy glaze permanently sealing him within the mad realm.

Following Palawa Joko's demise in 1331 AE, Brigadier General Kernel and the Pact Commander schemed to gather real and fabricated spoils of war from Elona to fool Mad King Thorn into thinking that Kernel's forces had merely forced the lich king to retreat. However, Oswald eventually began suspecting that his servants were keeping something from him, so Kernel and the Lunatic Court resolved to settle the matter in their own way to avert the king's potential, destructive tantrum. They brought what appeared to be the spirit of Joko himself to the Mad King's Labyrinth, delighting Oswald who had Joko replace the Bloody Prince as his new rival to exchange taunts with.

The ousted Edrick was placed on a bony shipwreck which was suspended above the labyrinth. Realizing that his father no longer cared about their family rivalry after reconnecting with the lich king, the Bloody Prince began pondering his role in the Mad Realm. While there, he met with and conversed with adventurers, including the Commander, while lamenting his fate. However, his interactions with visitors boosted his morale, and he decided to consider their encouraging words to seek his own path carefully.

Before completing The Outcast Prince
Hello. I suppose you've come to laugh at the castaway prince?

My father tried to strike my name from history after I fomented the rebellion against him. Now I'm trapped inside a box in Tyria...and trapped in this bad joke of an afterlife.

You're not fighting the Mad King anymore? (Same as below)

So now you're sitting here?

How many years has it been...? The Shell of Insanity, the maze... The uprising didn't take. Maybe it was all another of his bad jokes.

Well, you don't have to deal with him now. That's an improvement, right?

...Are you really trying to give me advice? Don't forget who I am! I am the Bloody Prince!

That's true, but you can still try to become a better you.

Huh. Maybe I'll think about that. I have plenty of time to ponder, after all.

Even so, I'm sure there are people who care about you. Ask for help. (Same as Dignity response above)

Then hold your head high and do something about it! (Same as Dignity response above)

You're right, maybe I shouldn't push this...

You should take some time for yourself, to think about what you want. (Same as Dignity response above)

You don't have to live in the Mad King's shadow forever. (Same as Dignity response above)

You're not fighting the Mad King anymore?

Yes, father found a new scarecrow to trade insults with. It turns out I was quite "disposable."

What's your story? (Same as above)

So now you're sitting here? (Same as above)

Sorry, but I have a busy schedule of killing things for loot.

After completing The Outcast Prince
Hello there. Sit for a while. If nothing else, I have the luxury of time.

What's your story? (Same as above)

You're not fighting the Mad King anymore? (Same as above)

I could stand to rest, myself, after keeping things contained here.