The Family Business is a tale by John Ryan.

By the third night, the mob around Castle Thorn had grown so thick that their bonfires reached the river, making a constellation of pyres that stretched as far as King Oswald Thorn could see.

"I swore my sandwich trees would've been the answer to this famine," Oswald grumbled. "They are complaining about the famine, right?"

Dribbin, the king's wizened counselor, felt his throat go dry. The king was not above beheading counselors who delivered bad news.

"Your endeavor to feed the populace by putting meat, cheese, and bread in the ground was a valiant one, Your Majesty, but this is about another matter. Your son had another...misadventure."

"The guards aren't talking, sire. It appears he bit their tongues off before he burned the village of Pelchalice to ashes. Six hundred souls. It's the fifth such slaughter this season." 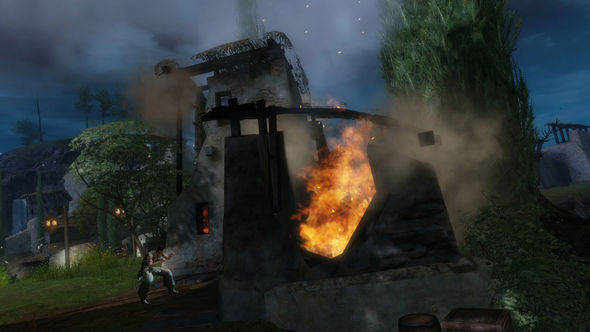 Oswald's face went ashen. Even for the feared "Mad King of Kryta," this news chilled his blood.

"Rumors state it is about a woman. News of Pelchalice has stirred the populace. They fear you have lost your mind..."

The Mad King raised an eyebrow at Dribbin.

"What I mean, sire, is that the crowd fears you've abandoned your normal, regal predilections for pure animalistic butchery."

"Insolent brat," Oswald sighed. "I'll handle this myself. And find out why those sandwich trees failed!"

Oswald threw open the doors of the majestic throne room, his voice booming as he crossed the great gilded hall. "You want a woman to love you, Eddie? You take her father hostage, not murder a village. You never did pay attention to my lessons."

Prince Edrick Thorn sat on the throne in a slump. He was a lanky boy, barely twenty, with a head of spiky hair and both lips and eyes smeared with pitch. Like all privileged boys his age, he had two facial expressions: scowl or smirk.

"You know I hate when you call me Eddie. It's Edrick," he said through a scowl. "Or 'the Bloody Prince.'"

"Not this again. That's as embarrassing as when you called yourself 'Painlord.' And you're not the king, so get off my throne."

"If I'm going to take your place one day, I should get used to the trappings of power." Edrick sat on the throne, smirking at his father. "Besides, you never know when today's your last day as a king."

"But why Pelchalice? Perfectly good way to summon a mob, which you did. Never kill people unless that's part of the joke, dear boy." 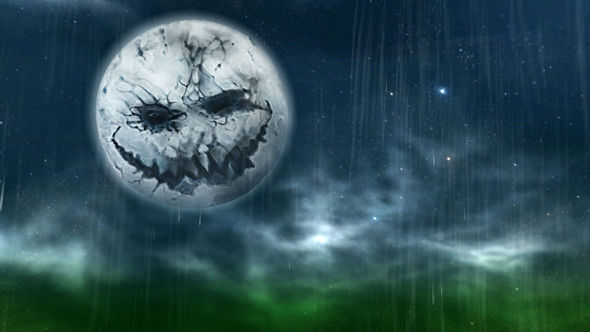 "The joke is you, including the punch line. I thought you would appreciate it."

Oswald halted in midstep. "What's so funny about my subjects trying to storm the castle?"

"Because I led them there. For years, you played with your subjects, made them the butt of your jokes. I decided it would be a perfect way to end your reign and start mine. I used your reputation to ignite an overthrow."

King Oswald growled, grabbed the prince, and pulled him off the throne. When the boy hit the polished floor, Oswald leapt on him, pointing a finger in the boy's painted face.

"I've skinned, burned, boiled, skewered, snapped, exsanguinated, disemboweled, stampeded, frozen, and catapulted my subjects! But each time was part of a wonderful joke. Countryside flooded? Nail stilts to everyone's legs! Worst snowstorm in a century? Fire flaming debris at the villages to keep them warm. I care for my subjects. You just want blood on your blade. You are a grave failure as a Thorn."

"Are you finished?" Edrick smirked. "Because I know the rabble outside isn't. Surrender your reign and I'll go drive them off, or I'll kill you where you stand and make them think I put an end to their Mad King. Either way, I'll have the throne by dawn. In time, they'll forget you."

Oswald let go of his son and backed away.

"An interesting offer, my boy. One...I hadn't considered you having the brains for making. Give me until dawn to make my decision."

"A delay then. In the undercroft, I have a wealth of armaments. Rare Ascalonian longswords that never blunt, a full set of hand-forged Great Dynasty sun armor. You should at least see what you'll be inheriting."

As they entered the undercroft, Edrick expected to lust after rows of exotic weapons and armor. Instead, in the trailing rows of waning candlelight was an ornate metal box that would fit a man.

"Disappointed?" asked Oswald. "Now you know how I feel about you."

"You were always easy to fool. But I do have something for you. I take it you've heard of that box."

"That's what I named it? Oh, that's terrible. I'll think of another name later." 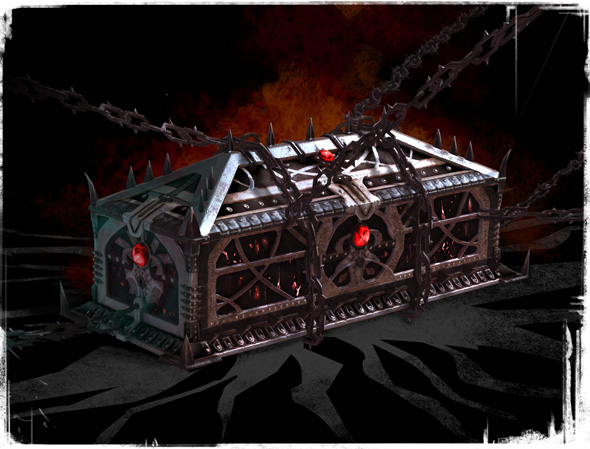 "The last man you locked in there ate his own face."

"To be fair, it was an improvement." Oswald grabbed his son and kicked hard against Edrick's knees, buckling him. "I hate explaining jokes, but in this case I shall. If any other person had threatened me like that, I'd publicly execute them for treason. But no, that would make you famous. I have something far worse for you in mind."

"Maybe it'll make you a proper Thorn at last. Oh, a little going away feast for you." Oswald reached into his pocket and shoved a handful of candy corn into his son's mouth before pushing him into the reliquary and slamming the lid closed. Oswald shouted for Dribbin, who burst into the room, ancient tome in hand.

As Dribbin chanted, chains snaked over and around the reliquary. When he had finished, the box was entwined.

"Do not touch it without gloves, Your Majesty," Dribbin said. "The ward will drain anyone who touches the box. Now, sire, far be it from me to question—"

"Send him to Istan," Oswald commanded. "My departed wife Zola had a desert island estate there. Let the sun fry what's left of my son's mind. Oh, and Dribbin, your scribes are to go to the archives and erase all mention of my son."

"Sire, such an endeavor will take time, and I'm not sure we can accomplish this before the gates fall. The guards and your courtiers have already fled. We are alone, and defenseless."

Oswald loomed over the counselor. "The Mad King says! Even if this castle falls, there will be nothing about that failure that is my son."

At dawn, Dribbin and his scribes reunited with King Oswald in the throne room.

"The records are purged, Your Majesty. It's as if your son never existed."

Oswald looked out on the mob streaming through the freshly stormed gates. It was only a matter of time.

Dribbin added, "I dare say the only ones who know what happened to him are living in this room."

"Funny you should say that."

Edrick's reliquary never arrived in Istan. It was stolen and restolen by a succession of warlords, gamblers, priests, and poets who all met terrible fates. Its tale attracted Nolani Academy scholars, who studied the reliquary until a war annihilated the school.

Amid the rubble and years, it lay dormant until an enterprising scholar dug her way into a chamber and found a chain-wrapped box waiting for her.

"Hello," Magister Tassi said as she approached it. "What's this?" 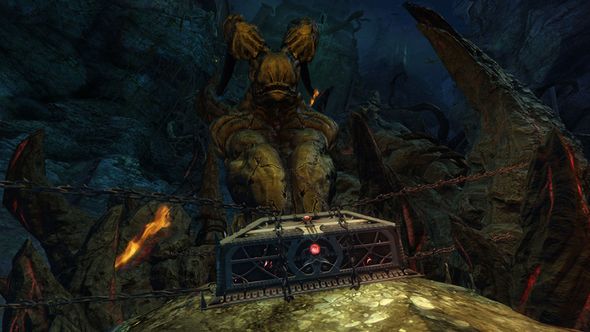