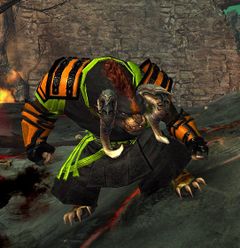 Part of
Defeat the strange foes coming through the haunted door

Veteran Rebel Lunatics are Halloween creatures from the Mad King's Realm that can be encountered in Kryta during Halloween when a Bloody Prince Door is opened. They're members of the Lunatic Court who have revolted against Mad King Thorn, choosing to serve his son, Bloody Prince Thorn, instead.

Veteran Rebel Lunatics briefly attempt to flee from attackers when their health reaches 25%.