This article is about the generic undead creatures. For the version summoned by the Legendary Skeletal Lich, see Skeleton (skeletal lich summon). 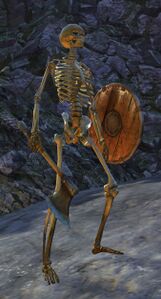 Skeletons are undead minions created by certain necromantic rituals or bound to Bloody Prince Thorn in the Mad King's Realm. In combat, they either wield axes and shields or longbows. They are considered to be Halloween creatures mechanically.

Anomaly:
Skeletons use male human sounds if they're hit by projectiles or killed with Fire or Lightning damage.