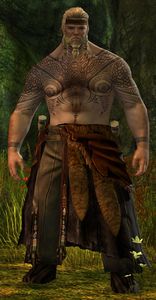 Gullik Oddsson is a norn of renown known for various deeds across Central Tyria. He is most known for assisting Dougal Keane and Ember Doomforge in retrieving the Claw of the Khan-Ur from Ascalon City, beginning the Ebonhawke Treaty ceasefire. He is the cousin of Gyda Oddsdottir, who died in the Tomb of Blimm while adventuring with Dougal, Killeen, and Clagg.

Only sparse details are known about Gullik's life before 1324 AE. By that point, he was well known for having participated in the Battle of the Burning Pass,[1] killing a mad grawl with his bare hands as a child, single-handedly defeating a score of destroyers in dwarf mines in Dredgehaunt Cliffs, and stormed the Watery Gravestone, killed its captain, and terrorized the Sea of Sorrows after taking command.[2]

He met Killeen in Caledon Forest after being injured while hunting the cats near the ruins for their hides.[citation needed]

After hearing about the death of his cousin Gyda, Gullik got drunk and confronted the asura Clagg who had hired Gyda, who in turn directed Gullik to Dougal Keane. Gullik ambushed Dougal in the middle of the night at the Vigil Centerhouse in revenge for Dougal not sharing the story of Gyda's death.[3] After passing out from a brief fight with the Vigil, Gullik was arrested by the Vigil and brought to General Almorra Soulkeeper, who explained Dougal's mission to recover the Claw of the Khan-Ur from Ascalon City Ruins with the intention of offering his freedom in return for his assistance in the mission. Before she could make the offer, Gullik wholeheartedly volunteered to join the mission in hopes of amending the misunderstanding caused from his drunkenness, as well as because he had grown bored of Kryta.[4]

During the travels, he had grown close to the asura Kranxx and the others on the journey. After reaching Ascalon City, Gullik was swarmed by the Foefire ghosts, and to assist the norn Kranxx threw a grenade intending to clear out the ghosts but the explosion was far greater than expected and when the flames cleared nothing remained.[5] This prompted Kranxx to sacrifice himself by using the Golem's Eye guardian to slam into King Adelbern with enough force to prevent the ghost from reforming long enough for the rest to retrieve the Claw of the Khan-Ur and escape. After the others had retrieved the Claw, Gullik climbed out of the rubble covered completely in his own blood but still hearty. After hearing of what happened while unconscious, he prompted that since they were there, it would be best to take more treasures than just the Claw of the Khan-Ur while the ghosts were still reforming.[6]

Are you here to pay your respects?

My name is Gullik Oddsson. My legend is known among the norn. I come here often.

Greetings, Gullik. Whose grave is this?

The only legend I care about is my own. Good-bye.

Whose grave is this?

Her name was Killeen. She was a sylvari of the night cycle, but she was the brightest light my eyes have ever seen.

What happened to her?

She and I, along with a human named Dougal Keane, a charr known as Ember Doomforge, and an asura called Kranxx tried to cross the Brand. Killeen...didn't survive. I've missed her every day since.

I'll pay my respects with you.

I'd like that, friend. And I think she would as well.

You stand quietly with the norn at the foot of Killeen's memorial. After a minute, you depart in a respectful silence.

I'm sorry for your loss. Good-bye.