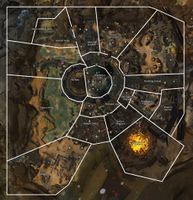 Built upon the ruins of the human city of Rin, the Black Citadel is the headquarters of the charr legions in Ascalon. Commanded by Smodur the Unflinching, Imperator of the Iron Legion, the great city is dominated by the huge metal-shod sphere at its center.

The Black Citadel is the headquarters of the Iron Legion and is built upon the ruins of Rin in Ascalon; it is the charr capital closest to the homelands of the other races in the game. The citadel is where the Iron Legion tests and manufactures items for the other legions and associated allies, including tanks, vehicles, and various types of armament. The city's arena, The Bane, sits near the center, in the shadow of the Imperator's Core where the citadel's leadership offices are.

The city itself is governed by a set of pragmatic laws, which keeps it running like clockwork. These are enforced by the ever vigilant and efficient Adamant Guard.