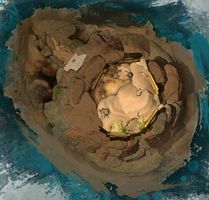 City? No. A nursery. Where the Forgotten toiled... Where Vlast's eyes first opened... Where Glint gave us her legacy.

Kesho is an instance only accessible during The Way Forward story step. It is an Exalted city in the Elon Riverlands, though now it is buried under the sand of Champion's Gap.

Like its successor, Tarir, Kesho was established by the Forgotten around two hundred years ago to function as a crèche for Glint's legacy—in this case, her first scion Vlast. Glint and the Forgotten studied the Ascension there for secrets that might help them fight the Elder Dragons.[1] According to legend, the city sunk after Palawa Joko had redirected the Elon River and caused quicksand to appear during his conquest of Elona.[2] Despite disappearing into the sands, Kesho would live on in the tales of the locals, and several treasure hunters would explore the Elon Riverlands in search of its location and rumored riches.

In 1330 AE, Balthazar broke into Kesho with Palawa Joko to study the Exalted in hopes of learning how the Forgotten had bound the Zephyrites' souls to metal constructs, so that he could create his Forged army using the same methods. Few Exalted survived the encounter without being corrupted, save for Sadizi, who locked himself away in the hopes that at least one Exalted would survive to continue protecting Kesho.

The Pact Commander eventually located Kesho and assisted Sadizi in defeating the Forged Exalted hybrids which Balthazar had left behind to prevent trespassers from discovering the lost city's secrets. Sadizi in turn provided the Commander crucial information about the true purpose of Glint's Legacy via recordings made by the Forgotten Josso Essher and Vlast: to replace the current Elder Dragons with more benevolent entities such as Glint's scions who could balance magic and restore harmony to the All. After these revelations, Sadizi sent the Commander back to the surface via a teleporter before sealing all entrances to Kesho for good so no one else could abuse its knowledge ever again.