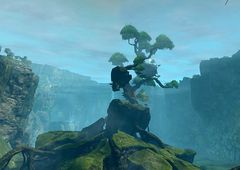 Dierdre's Steps is a hidden area in Mount Maelstrom. It serves as the stage for the Hidden Garden jumping puzzle.

This area is accessible through a Mysterious Portal created after defeating one of the elemental Keepers. Each is in a different area and opens a gate to a different start in Dierdre's Steps. Each keeper takes roughly 15 minutes to reappear.

Just copy and paste this text for easier in-game search.

Primordial Orchid (after completing A Henge Away from Home)