This article is about the leader of the White Mantle. For the statue, see Saul D'Alessio (statue).
Spoiler alert: The following text contains spoilers relating to Bastion of the Penitent. 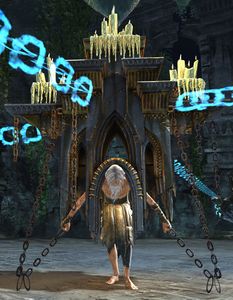 I never meant for any of this. All I wanted was Kryta to be free. They'll think me a traitor. My name will be reviled for generations.

Saul D'Alessio was the founder of the White Mantle. He saved Kryta from the charr invasion with the assistance of the mursaat who killed many of the White Mantle who had witnessed them, except for a few devoted followers, in exchange for their help. Saul immediately regretted his decision in worshipping these Unseen Ones as he was taken away by the mursaat, Lazarus the Dire among them, and disappeared from history.

A gambler and a drunk, Saul D'Alessio reached the lowest point in his life when he lost a bet he could not repay. Those he owed threatened to break his fingers and take his life if he did not pay them back in time.[1] In desperation, Saul took to robbing travelers and eventually paid back his debt, but he was recognized by one of his victims and was caught. He was tried as a thief with the punishment of exile from Kryta. The local authorities blindfolded him and rode him out three full weeks before leaving him to fend for himself in the wilderness.

Alone, broke, and lost, Saul wandered through a dense forest for several days, surviving on only roots and berries. On the fourth day, delirious with hunger, Saul emerged from the trees to see what he thought was a hallucination—a city of massive towers with alabaster and golden filigree reaching into the heavens.[2] Walking down into the city, Saul got a closer look at the denizens, the mursaat, whose graceful form and demeanor impressed him greatly. Hungry and exhausted, his clothes ragged and dirty, Saul dropped to his knees and touched his forehead to the ground. He had found his gods, and they in turn had found their most devoted disciple.

Founder of the White Mantle[edit] 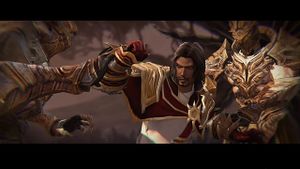 Saul is taken by the mursaat.

Saul returned to Kryta a changed man. His rags had been replaced with a sleeveless, pure-white robe embroidered with golden thread. His once sunken, sickly features were again full and healthy. He no longer craved the bottle, no longer wished to strike it rich gambling. His life had purpose. He had returned to spread the word of the Unseen Ones, to deliver his finding to the humans of Kryta.

As the charr invasion ravaged Kryta and the Lionguard fell, King Jadon fled the throne and left the kingdom leaderless and vulnerable. Seeing the plight of his people, Saul spread the faith of the Unseen Ones. The charismatic Saul became a shepherd who gathered an ever-growing flock from a people desperate for salvation, and his sheep followed his every step as they assisted Krytans in need. Those who showed real conviction to Saul's cause were given white robes similar to his, each embroidered with golden thread, which led to the founding of the White Mantle.

Once a shepherd, Saul assumed the position of a general of his growing army and managed to halt the advance of the charr for a time. To end the war, he devised a desperate plan. He and a small group of his most elite fighters would sneak into the main charr encampment in the dead of night and assassinate the charr leaders. It would confuse the charr enough for the Krytans to fight back and force them out of Kryta. However, the plan was dangerous, and Saul knew that the chance of survival was slim.

The plan went perfectly and as anticipated, the charr turned on the squad. Saul did all that he could do: pray, and hope that the Unseen Ones would spare him. Surprisingly, his gods obliged. Three of the mursaat—Optimus Caliph, Mercia the Smug, and Lazarus the Dire—appeared and decimated the charr with their devastating magic and in so doing saved Kryta. However, their assistance came at a price. After destroying the charr, the mursaat turned on Saul's squad, who had moments earlier worshiped them as their gods, and murdered most of them as the Unseen Ones did not wish to be observed by anyone except the most devout. Only a handful of the most zealous White Mantle in the squad survived the unexpected treachery.

Realizing Saul's changed attitude at the sight of the massacre and to keep him from telling the Krytan population what he had seen, the mursaat took him with them. As he faded from mortal view, Saul realized he had not saved his people and his gods were not as benevolent as he had once believed. He had betrayed Kryta to new, harsher masters.

Saul is tortured by the mursaat and the Eye of Janthir.

Following his disappearance, Saul was elevated into a martyr and a hero of Kryta by the new White Mantle leadership under Confessor Dorian who spread a lie that Saul had died in the charr ambush. A tomb was built for Saul in Demetra and would be guarded over by Tenad the Faithful in life and even beyond death.

The White Mantle grew into a religious cult dedicated to the Unseen Ones. They ruled Kryta although the unseen hand of the mursaat was guiding the actions of their leaders who alone were aware of the Unseen Ones. Following the mursaat's instructions, the Confessor and the conclave had the White Mantle use the Eye of Janthir to find gifted people among the Krytan population and bring these Chosen to the Maguuma Bloodstone in Bloodstone Fen where the selected group was sacrificed in order to keep the Door of Komalie shut.

However, once White Mantle lies and their sacrificing of victims atop the Maguuma Bloodstone were exposed by the Shining Blade who had first learned of the truth, Krytans turned against the cult. The conflict led to the Krytan Civil War which lasted from 1072 to 1079 AE and ended with the victory of the Shining Blade and Salma, the daughter of King Jadon, who became the Queen of Kryta and the founder of the Salmaic dynasty. With the mursaat and the conclave defeated and their stranglehold over Kryta diminished, the few White Mantle who had survived the war scattered throughout the Maguuma Jungle and became regarded as boogeymen in children's tales.[3] Saul, once viewed as the hero of Kryta, became reviled by modern Krytans as the treacherous founder of the White Mantle.

Unbeknownst to all, Saul had survived his encounter with the mursaat. Following their capture of Saul, the mursaat had taken him to the Bastion of the Penitent as a prisoner. There the Eye of Janthir was used on Saul to keep him alive through the centuries to suffer under the hands of the demon Deimos in the hopes of breaking Saul so that he could be of use to the mursaat as the true, once again devout leader of the White Mantle. 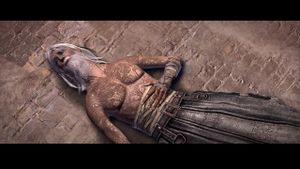 Saul finds peace after the defeat of Deimos.

At some point Saul kept in contact with other prisoners via notes, attempting to escape the bastion but in vain. He was eventually placed in Solitary Confinement, isolated from other inmates. After the Krytan Civil War, the mursaat were assumed to all have been killed with the exception of Lazarus the Dire who had gone into hiding, but Saul and other inmates remained imprisoned indefinitely. A prison riot took place some time later, but Samarog, the kingpin of the prison who acted as the warden in the mursaat's absence, ended the riot by slaughtering all who attempted to escape, leaving the trapped Saul as the sole inmate alive.

Saul was found by Scholar Glenna and a group of raiders who were exploring the bastion in 1330 AE after a mysterious portal had led them there from Bloodstone Fen. He was bound and shackled to both the location and the demon Deimos who was feasting on his suffering. The raiders freed Saul and helped him battle his manifested vices of Greed and Pride, after which Saul joined the raiders' side to face Deimos who threatened them all.

Once the demon had been defeated and the Eye of Janthir had retreated, the Eye's power no longer sustained Saul, who then died. Feeling sorry for what Saul had been through and how he had earned a worse reputation than he deserved, the raiders chose not to inform the Krytan government about Saul's existence in order to avoid causing a political uproar. Instead they opted to have Saul's remains interred on Krytan soil without fanfare so the founder of the White Mantle could finally rest in peace.[4] Later, after the Crystalline Heart was buried under the tree inside the Bastion, Saul's ghost appeared and gave the adventurer his final thanks.[5]