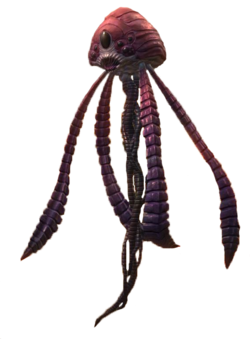 Wind Riders are floating tentacled creatures that loosely resemble floating brains. Many Wind Riders are capable of chaos magic, using magic that resembles a mesmer's. They remain primarily in more humid climates, such as the Maguuma Wastes, Crystal Desert, and volcanic lands. They also tend to be drawn towards places and objects of magic.

According to Telius, at least some Wind Riders are not beings native to Tyria, but "unleashed" by a powerful sorcerer named Sybitha, though whether this means Sybitha created them or brought them from another land (or world) is unclear. They were also seen in The Mists in the past, implying that they come from another world entirely, if not The Mists themselves.