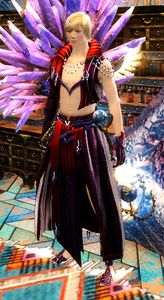 From
The Netherlands
Gender

As Guild Wars Legacy player who pre-purchased the game, I started playing during the first beta weekends. However, only a few weeks after the game's official release I more of less got disappointed by the new weapon-based skill system and could not find a build that suited a convenient playing style for me. This ultimately resulted in taking a long break with the game until around the Season 1 finale. But after this break I gave the game a second try and found a nice and convenient Scepter/Dagger build which focused on Earth Magic and condition damage. (Bleeding) Having finally found a nice build I quickly found myself back into the game, finishing the main story line. Here I regained an old hobby of me, namely Title/Achievement Hunting like I did in GW1. I also find great enjoyment in just exploring the game, including trying to break out of the normal accessible parts of the map and void jumping.

The new achievement system has proven to be a good motivator for me to try out new content and game modes, including WvW and some PvP. I still consider myself to only be a casual player but I enjoy the game and hope to continue to have a wonderful journey through the beautiful world of Tyria.

Guild Wars and Guild Wars 2: A personal story and thanks[edit]

As originally posted in the Guild Wars 2 forum: on May 2018.

After all these wonderful years, I think it is time for a "thank you".

I probably must explain a bit first. 2006. The MMORPG genre always intrigued me but they existed for many years already and I surely thought I missed the boat already. It was very silly to think this way in hindsight, but that was what I thought. Also, most games of this genre required a monthly fee and because I only had some pocket money to spend what was simply no option. I've seen a few magazine ads of Guild Wars but I was playing other games by then (Mostly Unreal 1) so I was in no hurry to try anything else. See, I have some autistic traits in my personality which for now mean that I'm feeling quite a bit of resistance before I try anything new.

The year was 2006 when I finally started playing Guild Wars. I finally bought a beautiful Prophecies Deluxe edition when it was for sale in a local shop. It was my first MMORPG and I was stunned by both the beauty of the game and the ease of the controls. Point and click, Space to apply. just like Windows. I quickly made my first Elementalist character Hyper Nl (mentioned like my Unreal nickname) and started exploring.

I loved the idea that **I** was finally and actually playing a MMORPG and I absolutely loved the beautiful lands of what is now known as Pre-Searing. I was too shy to actually to anything social yet, but just exploring the world and learning the game was enough. I quickly became Ranger secondary just to be able to charm a Stalker and I thought I was the best. Killing everything with Flare, Healing myself with Troll's Unguent. Who needs more skills? Well, then I left pre-searing, and it was quite a shock. Not only the tranquil lands of the tutorial area was gone, I also had to face real opposition. I was quite low level of post-searing and the game was HARD for a newb like me. But still, the game explained itself very well and slowly but surely I managed to find my way through the endless lands of post-searing Ascalon. Here I was picked up at one of the missions and had my first group play. While I never even heard of something like a _build_ and forget about something like a _metagame_, I got experience, leveled up and progressed through the story just fine. And wow, what a story it was. Still, to this day, nothing gave me the experience of an epic journey like the original Prophecies game with all its plot twists.

I have to thank the countless and forgotten players who picked my up in one of the many PUGs and sometimes showed true heroism of finishing the Desert missions while everyone else was laying dead on the ground. The game continued to fascinate me with it's beautiful graphics, landscapes and not to underestimate: Jeremy Soule's amazing soundtrack. I think the summit of this were the final missions at the Fire Island chain. I never felt so lonely as when I was roaming there at seemingly the end of the world with the Abaddon's Mouth soundtrack in the background.

It was a few months later and I knew that I discovered something very special with the franchise. I bought the Factions and Nightfall Collectors Editions without hesitation and continued on my journey. I slowly started to learn something about skill combinations and finally abandoned my /R Melandru's Stalker for something actually useful. After finishing both new campaigns I found a great motivator in the title system. I had seen players with "Tyrian Grandmaster Cartographer" under their names and was very much impressed by their accomplishments. (To the GW2-players: This title means that a character has visited every tiny corner of every map of the continent.) To me this meant that I had to revisit every area and started scraping to accomplish the same. Something that took me months and again I got great help of my fellow players: This time at the Guild Wars Guru forums who made a Photoshop map comparison of my nearly completed map with their 100% completed one. (Marking the areas I missed) From one title came the next until I was both Legendary Cartographer as Kind of a Big Deal. With later game updates, the KoaBD title track was expanded again and again and this was my ultimate motivator to keep playing. All the then-new hard-mode titles were still off-limits for my player skill level but I progressed and actually used a somewhat balanced build.

And then Eye of the North was announced. 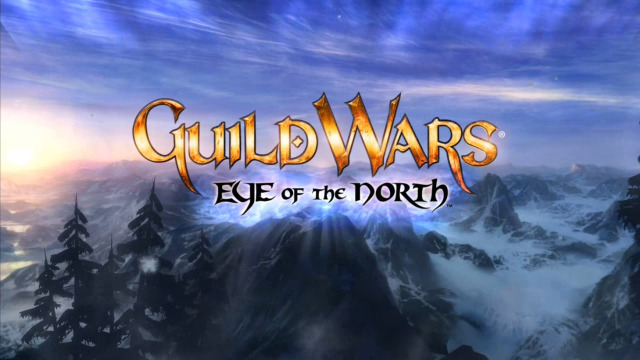 YouTube:Eye of the North trailer

I never was so hyped. I immediately pre-ordered and took two weeks off my work at release date in which I completed the main story and some of the dungeons. The title system became my ultimate motivator to try new things. I already achieved KoaBD rank 3 and continued to play to achieve whatever was within my reach. Still, everything on my only and main Elementalist. I like to keep things simple and focused. And then things turned slower. Guild Wars 2 was announced together with the GW:EN release but kept being delayed and I mostly played Fort Aspenwood Kurzick because I just loved the mission. Of all the time in the game, I probably spent half of it in this mission alone. Here alone I finished both the Savior of the Kurzicks and Luxons titles and in the mean time I filled my Hall of Monuments to prepare for Guild Wars 2 which was only a hype by then. 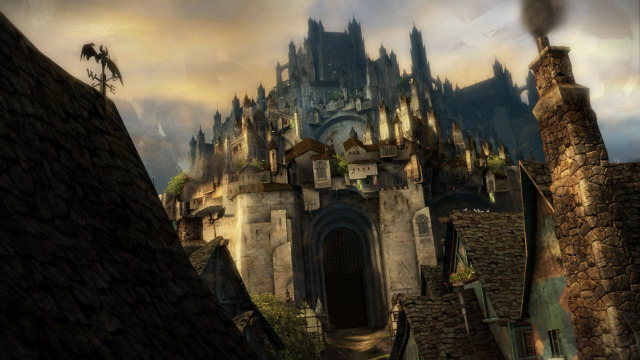 Then it became 2012 and in August of that month, Guild Wars 2 was released. Again, I was astonished by the beauty of the game and again I made an Elementalist, Aranimda. But here I ran into a brick wall. I had a hard time adjusting to the new weapon-based skill system and I experienced the game as one big struggle because every weapon seemed to give my other skills I had no use for. I missed the select-target-and-spam-fire-magic method I grew to love in the original game. Now attack skills started to slide my char back-and forwards and I had to ground-target my AOE before I could fire them. Disappointed, I quit GW2 and went back to GW1. Living World season 1 came and went and I almost completely missed it, which I regret until this day. Then I tried again. On YouTube I found a great guide for a leveling build for an Elementalist which revolved around earth magic and stacking bleeding conditions. It worked out fine and after a lot of trial and error I finally found a weapon set that worked perfectly for me. Scepter/Dagger. It offers a nice mix of the ranged attacks of the scepter with the raw DPS of the offhand dagger. While my builds changed, I still use this weapon set today. I finally reached Level 80 late into 2013 and again found the achievement system as a great motivator to try new things. As Legendary Cartographer of the first game, I first went for World Completion, which was a lot easier here than in the original games. And then it went quickly. World Completion brought me into WvW (Which by then required to have completed all WvW maps) and AP hunting ultimately got me to PvP and the Dragon rank, which would be unheard of if you would ask me if I would ever have this in the beginning of the game.

In some ways, I still feel like the newb who started this journey, but in other ways I am proud of what I have been able to achieve, slowly but surely, bit by bit. Last year, I returned to Guild Wars 1 and finally started playing Hard Mode. The 7 hero teams and builds finally allowed my to do it and also survive. This and a lot of patience lead to the unimaginable: Reaching the GWAMM title in 2017.

As for now I slowly but surely continue to discover this amazing franchise. Sometimes I still suck. Sometimes I own. But always I am thankful for being able to play this game. I may have whined. A lot. Usually for a reason. About various bugs, and issues about everything that can be improved. With this, I do not want to tell you that Guild Wars/GW2 sucks, in contrary. I love this universe and care every bit about it.

Thanks for making the franchise. Thanks for the Epic Journey. Thanks for being so accessible and forgiving with your game. Thanks for being such a beautiful part of my life the last 11 years. Thanks to Jeremy Soule and the GW2 music team for the beautiful soundtracks. The game would have been nothing without it. Also, thanks for all the random players who helped me along the route. Thanks for finishing the missions where I was clueless. Thanks for showing me around or just being there to play the last very hard Nightfall missions in hard mode. Thanks for being awesome. I hope you will never leave me, Guild Wars!

I'm active in the Unreal (The original Unreal most people refer to as Unreal 1 nowadays) community since 1999. For many years I was just another Deathmatch player but in 2003 I 'discovered' cooperative play and decided to make my own Unreal coop server. This was where I learned to know the small but driven community behind the aging game. I received a never imagined amount of support which allowed me to create a great gaming experience for anyone who joined my server. Over the years I worked together with many developers and scripters, allowing me to have the latest add-ons and game types and allowing them to have a valuable real-life testing field for their projects. Nowadays I run 4 Unreal servers with different game types. Coop is still my main focus with my 'HyperCoop' servers. I also run a website with much background information and resources for dedicated Unreal players. My interest in cooperative play eventually brought me into buying my first MMORPG game: Guild Wars. :-)

For more info on my Unreal activities and servers, see my Unreal website.