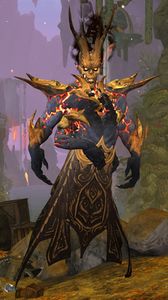 The djinn will rise, with me as their one true ruler—he who can craft life from the dregs of this world!

Qadim is a fire djinn rival of Zommoros and a collector of exotic specimens. He is the third and final boss as well as the main antagonist in the Mythwright Gambit and The Key of Ahdashim raids. Many of his specimens have escaped him and can now be found in Jahai Bluffs, where the Order of Shadows has placed a bounty on them.

As a fire djinn, Qadim viewed himself superior to what he considered to be lesser races and advocated djinn supremacy. He collected various living beings from all around Tyria as curiosities to add to his menagerie within his lamp although it is not known if he did so for his own amusement or with the intention to show them off to someone. Qadim's collection did not grow old while in captivity for unknown reasons, thus denying them release via death.[1] Qadim and his water djinn rival Zommoros competed against one another by making many wagers over the centuries with Qadim winning all of them. Losing one particular wager against Qadim forced Zommoros out of Elona.[2]

In 1331 AE, Qadim learned of the existence of Zommoros's Mystic Forge and the Mythwright Cauldron within it via unknown means. Wishing to investigate it further and claim it for his own, the fire djinn challenged Zommoros to another wager in which their respective hand-picked champions would fight in three encounters. If Qadim's champions won, the fire djinn would get the Mystic Forge for himself; if Zommoros's champions won, however, the water djinn's debts to Qadim would be cleared. Zommoros accepted the wager and lured in would-be tourists whom he bound with a contract to fight in his name as raiders. To add even more stakes to the wager, Zommoros suggested that he would relinguish his ownership of the raiders to Qadim if he was defeated while Qadim would have to pay Zommoros everything the water djinn owed him if Zommoros won instead. Qadim accepted the added stakes, believing that he would win effortlessly.

However, Zommoros's chosen raiders surprised Qadim by defeating the fire djinn's three champions ranging from the menacing Conjured Amalgamate to the skilled largos twins Kenut and Nikare. The victorious water djinn confronted Qadim and demanded that his debt be cleared and that he also be paid what he had owed the fire djinn in return. Angered at being bested and realizing what the true power within the Mystic Forge was, Qadim revealed his plan to not only add Zommoros to his menagerie of exotic specimens but also take over the Mythwright Cauldron and use its power to create living, legendary creatures. Horrified, Zommoros revealed that he had deliberately built the Mystic Forge to conceal and protect the Mythwright Cauldron from falling into the wrong hands and warned Qadim not to attempt creating life with it as it could result in twisted horrors emerging.

Ignoring djinn laws and the water djinn's warning, Qadim breached the Mythwright Cauldron where Zommoros and the raiders confronted him in battle. Using his magic, Qadim imprisoned Zommoros in his lamp where the water djinn remained until the raiders broke him free. Upon escaping the fire djinn's lamp, Zommoros aided the raiders in their fight against Qadim with his magic and learned that the fire djinn's ultimate plan was to unleash the horrors created with the Cauldron to wipe out the "unworthy" races from the face of Tyria and become the supreme ruler of all djinn. Disgusted, Zommoros called Qadim mad for succumbing to lust for power.

After a fierce battle, Zommoros and the raiders prevailed over Qadim who fell into the Mythwright Cauldron. However, they witnessed the fire djinn emerging in a shadowy form soon after and gleefully fleeing from the realm while Qadim's lamp lost its power. Zommoros speculated that exposure to the Cauldron's magic had changed Qadim in unexpected ways although he could not say how.

Word of the clash between Zommoros and Qadim spread to Jahai Bluffs in Elona where the Order of Shadows placed bounties on dangerous specimens which had appeared in the region after escaping from Qadim's menagerie.[3][4]

Well, what are you waiting for? Your first challenge awaits!

But I have no idea what you're talking about!

Qadim: That is hardly my problem. Now, begin the challenge!

I guess we don't have a choice.