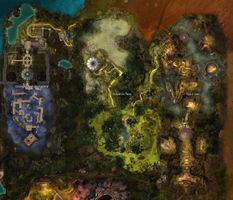 A Pact squad has gone missing in hostile territory, but the deadly forest isn't the only risk to the rescue operation. The area holds dark secrets and strange magic.

Forsaken Thicket is the first raid to be released in Guild Wars 2. Attempts at bosses within this raid and completing events award Magnetite Shards, the zone's currency.