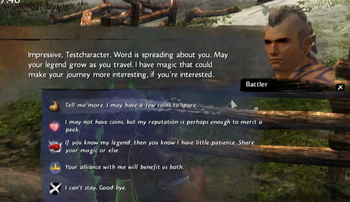 Example of a dialogue which will influence personality.

Personality is a hidden roleplaying mechanic that affects a character's interactions with NPCs in the world. The initial personality is determined by how the player answers biography questions during character creation and is refined by the most recent 100 encounters with particular NPCs.

The game keeps track of three aspects of personality: Charisma, Ferocity1 and Dignity, whose sum is 100%. Dialogue choices are able to affect the personality by increasing one aspect and thereby decreasing the others. For example, constant bullying of shopkeepers might increase ferocity to a point that the character becomes barbaric. Similarly, frequent cunning will lead to a reputation as a scoundrel.

Personality affects gameplay by offering certain dialogue options only to some types and altering the reactions of certain NPCs. However, the game was designed to avoid extreme consequences, i.e. players are able to take on different personality types without fear of losing out on overall rewards or benefits.

1 Personality-based ferocity is completely unrelated to the attribute called ferocity.

Different personality types and their icons before being hidden with the April 2014 Feature Pack.