This article is about the mount. For other uses, see Roller Beetle (disambiguation). 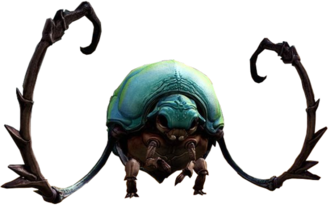 A once-humble scarab beetle, bulked up to phenomenal size and strength by asuran science.

The Roller Beetle is a mount released with the Episode 3 of Living World Season 4, Long Live the Lich. It is the first new mount released since the launch of Guild Wars 2: Path of Fire.

Unlocking the Roller Beetle is a four stage process. Stages 2, 3, and 4 are collection achievements. The items required for these collections do not consume inventory slots.

After completing the second mission in Long Live the Lich, Forearmed Is Forewarned, at the beginning of Tactical Triage speak to Spearmarshal Zaeim in the Domain of Kourna in a building on the southern side of the Allied Encampment (west of the

Allied Encampment Waypoint — , after the square with the merchants), and then talk to Gorrik on the northern edge of the Allied Encampment. This conversation will complete the High Roller achievement and unlock the first collection.

This collection contains ten items. Nine of these items are found in various locations across the Domain of Kourna. The tenth item is acquired by speaking to Gorrik after collecting the other nine.

This collection contains nine items, however only seven must actually be found. (The eighth and ninth are awarded after collecting the other seven.) These items are found in a mix of both the Domain of Kourna and several regions of Central Tyria.

This collection contains eight items, the eighth of which can only be unlocked after collecting the other seven. These items are found across Kourna, Tyria, and the Crystal Desert.

Roller beetles can cross vast stretches of sand dunes in the blink of an eye by curling into a ball to gather momentum. Controlling beetles gracefully at top speed requires skill and finesse, encouraging their fans to form competitive racing networks across Tyria.

Unlike most mounts, the Roller Beetle does not have a fixed running movement speed. It has a base movement speed (600 units per second), which is equivalent to that of the Raptor. If the Beetle rolls down a hill or if its primary movement skill is used, it accelerates up to triple its normal speed (1800 units per second). The Roller Beetle can then sustain this higher speed until it rolls up too steep a hill or crashes into terrain, both of which will slow the Beetle down.

Boosting consumes Endurance, requires a full Endurance bar to activate, and consumes the full bar in a single activation. This ability gives a massive boost to the Beetle's speed and acceleration for 2.5 seconds. After boosting, it takes 15 seconds before endurance is full and boost can be used again (2.5 second cool down while the boost is active where endurance remains at 0, then 12.5 seconds to recharge).

The drift key is the Roller Beetle’s second ability and can only be used when the Beetle is rolling faster than 1000 units per second. This ability causes the Beetle to enter special drifting states which allow the Beetle to make sharp turns at high speed.

The following method for drifting is one which is designed to be consistent at both making turns and losing as little speed as possible. It is not the only way to drift but it is recommended.

There are two parts to the drift: the setup and the follow through. To set up the drift, press and hold the drift key, then press the turn/strafe key in the direction you wish to turn. It is important to keep the drift key held during the setup up as this drift state allows the Beetle to rotate freely while also maintaining the Beetle’s current velocity. You should begin the drift setup up a little before you plan on making the turn, to allow time for the Beetle to rotate.

Once the setup is complete and you have reached the turn, release the drift key while still holding the turn/strafe key. This will cause your Beetle to begin turning in the direction it is facing. Begin to slowly turn your camera (with right click held or while using the action camera) to the point where you wish to finish your drift. Throughout the entire turn it will help to very quickly tap the drift key. This will give you more control over the Beetle while also minimizing speed loss, by rapidly alternating between the drift and slide states. Once you have completed the turn, you can leave the drift by simply releasing the turn/strafe and drift keys. The Beetle will reorient itself to align with the direction the camera is facing on its own.

The following tricks and techniques were found by the beetle racing community, and aren't individual mount abilities but combinations of the already existing Roller Beetle abilities and movement control. There are several advanced drifting techniques for the Roller Beetle which allow the Beetle to break through the normal speed limit. They are the powerslide, air drift, air canceled sliding (ACS for short), and hyperboost. Note: since jumping is required to begin an ACS on flat ground, it is extremely useful to check the “Disable conditional mount movement ability input” option in the general options. This will separate the boost key from the jump key. This option applies to all mounts. 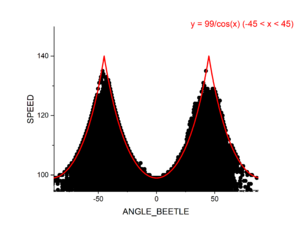 The powerslide is the most basic of the advanced drifting techniques. All that is required is to drift along a sloped surface. For best results, use the turn/strafe keys to keep the beetle angle above 0° while holding the drift key. Drifting perpendicular to the slope with the Beetle facing down the slope will result in the highest acceleration. The greater the angle of the slope the more acceleration. This technique is most useful on guild hall tracks, but can still be used in the open world.

Air canceled sliding (or ACS for short) is a powerful technique which allows the Beetle to accelerate on flat ground without the use of the boost. It can help to think of the ACS as its own drift state, separate from the other two.

To perform an ACS, you must successfully land an air drift. In most cases, an ACS is entered by performing a jump drift (an air drift induced by a jump), usually on flat ground. There are several steps required to perform a jump drift. First, press the drift key to begin a drift, then press the turn/strafe key in the direction you wish to turn. Next, you need to turn your camera and then jump. It is important to begin turning your camera just before jumping, and to continue turning the camera through the entire duration of the jump.

You *must* hold the drift key after landing the air drift and for the entire duration of the ACS. The Beetle will leave an ACS the moment the drift key is released. Your beetle angle must be between 35° and 60° upon landing in order to enter the ACS drift state. The ACS will last for a maximum of 1.8 seconds after which the Beetle will enter a regular slide and begin slowing down.

After entering an ACS, the Beetle can be turned by turning the camera. For maximum acceleration, the Beetle angle should be kept around 45°. More or less than this will still result in acceleration, so long as the beetle angle stays between 20° and 70°. It is extremely useful to be holding the turn or strafe key in the direction you wish to turn the Beetle during an ACS as these will both increase your beetle angle.

Chaining ACS allows you to stack the overspeed to generate higher speeds over time. However, in order to chain an ACS successfully you must jump again, which is impossible in the ACS or slide state. It is therefore necessary to release and re-press the drift key to allow the Beetle to jump.

The hyperboost is a special boost that is performed by boosting while drifting. It is by far the easiest way of reaching the true max speed of the Beetle.

To perform a hyperboost, press the drift key and the turn/strafe key in the direction you wish to do the hyperboost, turn the camera, then press boost. The steps are similar to that of a jump drift, except that instead of jumping, the boost key is pressed. It is important to hold the drift key for the entire duration of the boost in order to achieve the maximum possible speed. You will also need to keep the beetle angle between 43.9° and 46.1° to achieve the maximum speed.

The drift hold is the only technique on this list which does not accelerate the Beetle. Instead, it is used to maintain speeds above the Beetle's normal maximum while traveling in a (mostly) straight line. After performing any of the above techniques to go over the Beetle’s normal speed limit, release, repress, and hold down the drift key. This will cause the Beetle to travel in a straight line while maintaining its speed. Because the Beetle will eventually leave the traction-less drift state after 1.8 seconds, it is important to release and repress the drift key within this time in order to maintain the Beetle’s momentum. This will cause the Beetle to turn slightly and lose some speed, so it is advisable to keep the drift key held as long as possible before repressing.

For increased control over your mount, you can check the box in the general options menu for "Disable conditional mount movement ability input." This will separate mount ability 1 from Space, and mount ability 2 from S. Do keep in mind that this will also unbind it for all other mounts as well, with differing results.