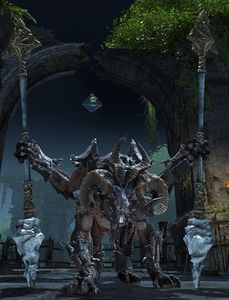 Samarog is the third boss in Bastion of the Penitent. This mysterious entity is a former prisoner of the Bastion.

Samarog's origins and why it was locked up in the Bastion of the Penitent remain unknown. Scholar Glenna theorizes, however, that Samarog and other inmates of the bastion may have been political prisoners whom the mursaat wished to sway to become their servants via alternating between bribing them with promises of power and breaking their spirits with intense mental and physical torture if they showed any sign of resistance.

The mursaat eventually came to view Samarog as an exceptional inmate, turning it into the kingpin of the prison. In exchange for privileges, Samarog was tasked with watching over the other inmates, a duty it carried out eagerly during the mursaat's absence. Following a prison riot where several inmates tried to break free from the bastion, Samarog used the environment to its advantage to ambush several rioters and slaughtered them without mercy. During this time it enslaved the jotun Guldhem and the human Rigom under its will, tying their lifeforce into its own. After the carnage, Samarog continued watching over the now mostly empty prison and killing anyone it came across.

In 1330 AE, Scholar Glenna and a group of raiders entered the bastion and ran into Samarog while exploring the area. Samarog attacked the raiders with its two slaves, but the trio were ultimately felled after a fierce battle. The raiders, who had never seen a creature like Samarog before, were left with more questions than answers in the aftermath of the battle.

For walkthrough, see: Bastion of the Penitent#Samarog
Abilities

Bastion of the Penitent
Retrieved from "https://wiki.guildwars2.com/index.php?title=Samarog&oldid=2211486"
Categories: