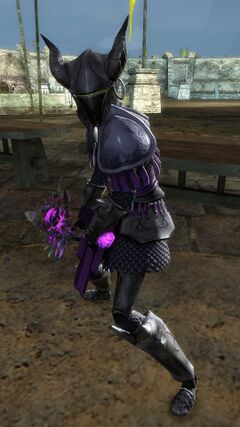 All of the weapons and each of the armor pieces have three different attribute variations available:

There's a great deal of armor and weaponry the Wyld Hunt have appropriated from Twilight Arbor. Would you like to see what I have?

I could use a new set of armor.

Tell me more about Twilight Arbor.

Twilight Arbor is a cavern in Caledon Forest and home to the Nightmare Court. It reflects their twisted and sadistic view of the world. If you head there, be careful.

I could use a new set of armor.

Anomaly:
Unlike all other 7 dungeon vendors, she doesn't wear the armor set corresponding to her dungeon: She trades the Nightmare armor set, but wears Dark Templar armor