From Guild Wars 2 Wiki
Jump to navigationJump to search
Spoiler alert: The following text contains spoilers relating to Bastion of the Penitent. 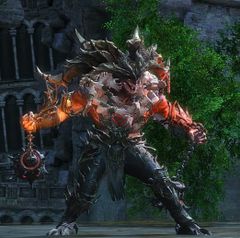 You will die where and when I decide!

Deimos is the fourth and final boss in the Bastion of the Penitent. It is a powerful demon feasting on the suffering and despair of a specific prisoner.

Deimos is a being of unclear origins. Though called a demon, which are beings born of malevolent energies of the Mists, it is a manifestation of Saul D'Alessio's sins and guilt.[1] Due to the unclear nature of demons, and the Bastion of the Penitent overlapping with the Mists, it is possible for Deimos to be both.[2] Deimos's very body depicts Saul's guilt and sins. The arms draped around Deimos's shoulders are the arms of fallen White Mantle soldiers who had died under Saul's command, while on its chest is a carving of a mursaat glyph representing the Eye of Janthir.[1]

Though its origins are unclear, Deimos worked with the Eye of Janthir, tormenting the mursaat's valued prisoner in order to break his psyche and turn him into the mursaat's puppet while feasting on his suffering. In the depths of the Bastion of the Penitent, Deimos thrived within Saul's mind via demonic realm and within Tyria.[3]

When a raiding party reached the heart of the bastion in 1330 AE and some of them were drawn into the demonic realm while trying to free Saul, Deimos attempted to stop them but failed. It then manifested in the physical realm to continue the battle and intimidate its opponents. The demon continuously taunted Saul and the raiders and even ended up drawing the party into the demonic realm in order to finish them off there. However, Deimos was defeated for good when, against its expectations, Saul overcame his personal demons and joined the raiders' side. Following the demon's demise, the party returned to the physical realm. The victory was bittersweet, however, as Saul passed away soon after, finally freed from centuries of torment.

For walkthrough, see: Bastion of the Penitent#Deimos
Abilities

1 Deimos's maximum health goes up in the demonic realm, but he spawns with 10% of max value in the second phase, so he only has 5,004,900 HP.
2 This value is the same in both normal and challenge mode.

Bastion of the Penitent
Retrieved from "https://wiki.guildwars2.com/index.php?title=Deimos&oldid=2342043"
Categories: