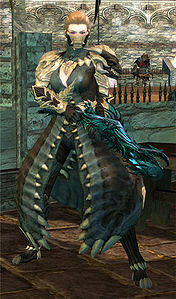 Officer Hetja was a dungeon merchant at Postern Ward in Lion's Arch, who exchanges unique armor and weapons from the Arah dungeon for Shard of Zhaitan tokens. Exotic Arah armor and Weapons of the Dragon's Deep have a required level of 80, as does the rare armor. Rare weapons are not available from this vendor.

All of the weapons and each of the armor pieces have three different attribute variations available:

Ah, what a battle! Such bravery! Such spoils for the victors! Would you care to see the armor and weapons we've brought back from Arah?

I'm convinced. Show me the armor.

Let me see the weapons.

Tell me about Arah.

Arah was the first city built in Tyria. Its majesty was twisted and corrupted when Zhaitan awoke. It's now a dangerous place, its history lost to foul beasts and the undead.

I'm convinced. Show me the armor.

Let me see the weapons.

I'm happy with the equipment I have.

I'm happy with the equipment I have.