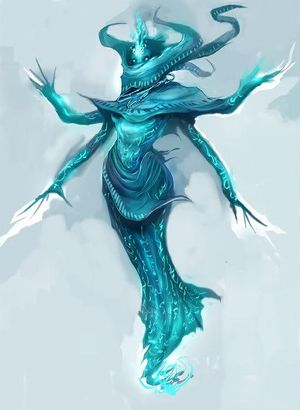 Djinn are spirits with deep ties to Elona, usually bound to spiritually strong areas. In some Elonian legends, they have the power to act unseen. Like humans, they are allegedly capable of choosing a path of good or evil. In a sense, djinn really can act unseen—many are shapeshifters, capable of assuming a human form when interacting with human beings and other species. Djinn are, unlike elementals, free-willed and sapient beings that have the capacity to communicate. Their souls are made up of elemental energies, as opposed to the servitor creatures that spells create. Djinn are to other elementals as humans are to other animals. They are made of similar basics, but more evolved. Some Vabbian myths describe the djinn as protectors of the natural world, making them enemies of unnatural demons from other dimensions.

Most djinn are bound to the locations and places they protect, most commonly rivers, lakes, and stretches of desert. When humans first came to Elona, truly powerful wizards attempted to bind djinn to estates, caves, vaults, or other places where wealth was hidden. Djinn guardians who outlive their masters may forget their original commands, or they may become powerful enough to find their own motives.

Djinn are relentless when defending the items, places, and causes they protect, but they may also bestow their favor on people who aid them in those tasks. Vabbian legends hint at djinn granting wishes and bestowing powers. In more recent accounts, adventurers have shared stories of djinn who offered them magical knowledge and powerful magical items...including some salvaged from mighty heroes who dared to disturb the djinn.