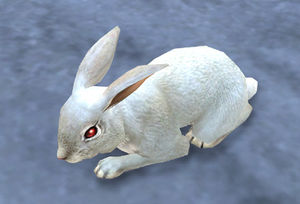 Ambient creatures (or critters) are a unique race and rank of harmless, passive NPCs like rats and rabbits. Ambient creatures have white names, never grant experience when killed, usually don't drop loot, and are extremely susceptible to damage. They can be found throughout Tyria and typically match their environments; crabs are found on beaches, rats are found in caves, snow owls are found in the Shiverpeak Mountains, etc.

Ambient creatures can be found throughout the open world, as well as in World versus World and in many instances, but there are certain areas where they're found in higher numbers.