This article is about the mysterious area in Jahai Bluffs. For the drawing at Wurmhaven, see Unknown 2 (Jahai Bluffs).
The correct title of this article is ???. The substitution or omission of the ? is because of technical restrictions. 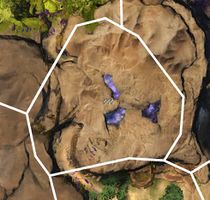 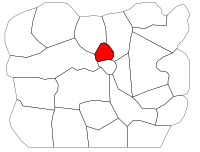 ??? is a cavern created by the Mists distortion that Kralkatorrik is causing by opening portals into the Mists all over Jahai Bluffs. It features a small portion of another world, with highly hallucinogenic mushrooms.

Run Around for No Reason

Astral creatures (Only while under the effects of Hallucination)

Scarlet Briar (Only while under the effects of Hallucination)

Section-stub. This key section of the article is incomplete. You can help the Guild Wars 2 Wiki by expanding it.
Reason: Dialogue does not appear in chat log, using name from Chaos Theory story step.

Fungus: What if all the enemies you ever faced were actually you? Would you still feel like a hero?
Fungus: Go on. Pet Rytlock. What's the worst that could happen?
Fungus: Are you a dragon dreaming that it's a hero? If you were, how would you know?
Fungus: Would you eat a talking mushroom? Go on. Take a bite.
Fungus: What if there were a real world— realer than this one? A higher order, so to speak.
Fungus: Have you ever licked an Itzel? Itzel sweat shows you the stars.
Fungus: No time to spore. Gilly, gilly, gilly. You're late!
Fungus: Have you ever wondered what size you truly ought to be?
Fungus: What if you are an Itzel dreaming it's a Nuhoch?
Fungus: In the space between two asura gates, do you cease to exist?
Fungus: Is the "you" who returned from the dead the same as the "you" who died?
Fungus: Can Palawa Joko Awaken himself?
Fungus: Are they truly your friends, or do they follow you out of obligation?