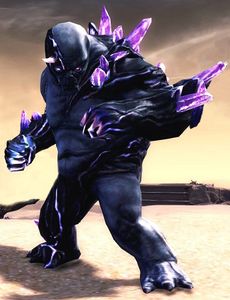 Champion Chief Kronon is a former ogre chief who has been Branded by Kralkatorrik. He led the Ogre Revolt and assaulted the Stronghold of Ebonhawke with a Branded army until he was called south to the Crystal Desert to join Kralkatorrik's horde. Kronon now roams in the Crystal Oasis, fighting anything that is not Branded.

Kronon was once the chief of the ogre tribes near the Blazeridge Gap. His son, Chiefling Ygor, was killed by Logan Thackeray and Rytlock Brimstone in 1319 AE, and Kronon swore to avenge Ygor's death.[1] At the time Kronon was 240 years old, old enough to have buried many sons. He had been born the very year that the Great Destroyer, champion of the Elder Dragon Primordus, had awakened. His great-great-grandsire had been born in the year that magic had come into the world. The greatest of his grandsires had been born before there were any humans.

In 1320 AE, Kronon, his ogre warriors and their hyenas had penetrated deep into southwest Ascalon, only half a day's march from Ebonhawke which they intended to invade in retaliation for Ygor's death, when the Elder Dragon Kralkatorrik awoke and flew overhead. Kronon and his army transformed into Branded by the Elder Dragon's breath, their muscles turned to crystals and their bones to stone.[2]

The Branded chief followed his new master south, to Ebonhawke, where the ogres steamrolled the Iron Legion siege and stormed the gates themselves, laying waste to the Ebon Vanguard. Queen Jennah, who had been visiting Ebonhawke to open the new asura gate, summoned her champion Logan Thackeray to protect her, tearing him away from the battle with Kralkatorrik.

When Kronon arrived, he let out a roar of incoherent rage that shook the walls of Ebonhawke.[3] He led the charge in a pitched battle in the courtyard, with the other side led by Logan Thackeray, who had released a century of charr from the dungeons in order to aid in the defense. Eventually, Queen Jennah herself summoned a tremendously powerful illusion of an Elder Dragon, tricking the ogres into believing their master wanted them elsewhere, and holding the humans and charr transfixed with a glamour, so that the ogres would think that they, too, had been transformed into Branded.

The Branded creature that was once Chief Kronon moved south and began wandering the northern areas of the Crystal Oasis, hungering to serve his Elder Dragon master.[4] In 1330 AE, the refugees in the Zephyrite ruins of Destiny's Gorge placed a champion bounty on Kronon, which adventurers could pick up from the Bounty Board there. Kronon was eventually slain by bounty hunters.

Section-stub. This key section of the article is incomplete. You can help the Guild Wars 2 Wiki by expanding it.
Reason: Flesh out what the attacks do