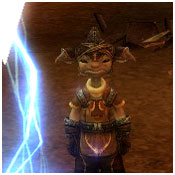 Have you seen my staff?

Blimm was a disturbed asura who lived several centuries ago. As much a genius as he was a paranoiac, Blimm is generally revered as one of the greatest golemancers to ever have lived. Blimm made great strides in golem construction now lost to time, including progress with necromantic constructs. His greatest achievement, however, is considered to be the Golem's Eye, a crystal that allows for the creation of self-replicating ambient thaumaturgic constructs.

Blimm served his apprenticeship under Oola, but quit after she moved his desk into the cellar, stopped paying him, and (allegedly) stole his favourite staff. After the Trial of Zinn, in which Oola bribed her fellow Arcane Council members into exiling the soul researcher and rival golemancer Zinn, Blimm followed Zinn to Kryta where the pair had a run-in with Livia, who was seeking allies for the Shining Blade in the Krytan Civil War. A lab was built for the pair along the Divinity Coast, where now stands Divinity's Reach. Their task was to build a protection golem that could defend against the mursaat, and to that end they were seen experimenting on a Seer. The White Mantle marched on Lion's Arch before they could install a power core, however, and they had to repurpose the core to provide a temporary blanket infusion-like effect on royalist forces.

The plan was a success, and after the royalist victory in the Battle for Lion's Arch, Blimm apparently stayed at his lab in Divinity Coast. Clagg tells of rumours that he kept "strange company" such as humans and necromancers later on in life, and Blimm's tombstone (unusual for asura, who are traditionally cremated) describes him as the greatest of the golemancers and the favoured counselor of Livia, suggesting perhaps that the two stayed in contact after the end of the war. Toward the end of his life, Blimm stopped believing in the Eternal Alchemy, thinking himself to be apart from it. It was this outlook that gave him more daring in his experiments, and allowed him to make the breakthroughs he did in necromantic golemancy.