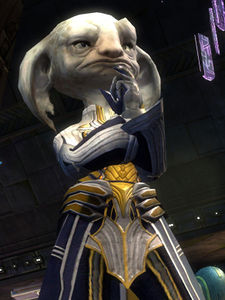 Headmaster Omadd was Headmaster Emeritus of the College of Synergetics. He was the individual who convinced the Arcane Council to admit the sylvari Ceara into the three colleges to study her experience there. After Ceara was banished from Rata Sum for her aiding the Inquest in stealing blueprints from Rata Sum's archives, Omadd spent months looking for her to bring her in for use in an experiment. The experiment supposedly would allow her to witness the Eternal Alchemy, though all previous subjects had died during the experience.

When Ceara emerged from the machine, she was changed and killed Omadd, adopting the name Scarlet Briar.

Even though Scarlet Briar killed Omadd, it seems she did not entirely forget about him. When putting together the pieces of her journal, some letters are capitalized out of place, hinting at the password she has set for her console - the letters spell "OMADD".

His machine, that enabled one to see the Eternal Alchemy, was discovered within the Cavern of the Shining Lights, though his body is nowhere to be found.