This article is about the non-playable race. For the NPC, see Ettin (NPC). 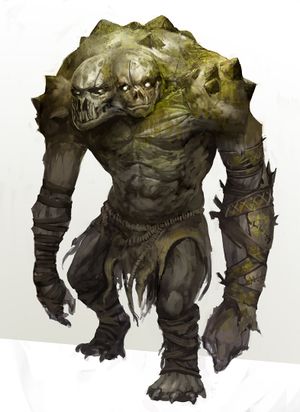 Ettins are large, brutal humpbacked creatures which can be found in Tyria. They have two heads which sometimes have their own personality and name, though despite this they are fairly dumb and have fragmented speech. They're also fairly illiterate. They are known for their hostility to others, especially those encroaching on their lands or interacting with their possessions.

They have a very primitive culture, and have established themselves in tribes led by chieftains. They appear to choose their chieftains based on physical strength and the respect earned from that. Their chieftains are often challenged when members of the tribe believe the leaders have become weak or soft-hearted. Ettins prefer to live in caves or on cliffs, and avoid civilized areas when possible. They are known for using carcasses of their kills for decoration in their homes, which can also serve as a warning to intruders.